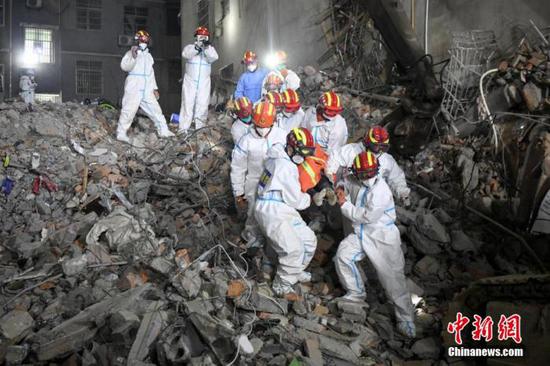 The 10th person is rescued from a collapsed self-built residential structure in central China's Hunan Province on May 5, 2022. (Photo/China News Service)

(ECNS) -- The 10th person was rescued from a collapsed self-built residential structure in central China's Hunan Province on Thursday morning, 131 hours after the accident happened on April 29.

The survivor was detected during a whole-area silent search at around 8:40 p.m. on Wednesday.

Medical experts held consultations on the spot and an ICU ambulance was on call.

“We are looking forward to the next miracle,” said a rescuer. Another silent search was conducted after the survivor was sent to hospital.

The building collapse happened in Wangcheng District in the provincial capital Changsha. A total of 23 people are believed to be trapped in the building and 39 others near the site are missing, according to a preliminary investigation.

Ten trapped people have been rescued and five found dead so far.

During the rescue operation, the rescuers detected signs of life through traditional methods, such as shouting, knocking, and sniffer dogs, as well as life detectors and drones.

In addition to daytime searches, rescuers have carried out whole-area searches and accurate positioning of key points in silence during early morning hours and every night.