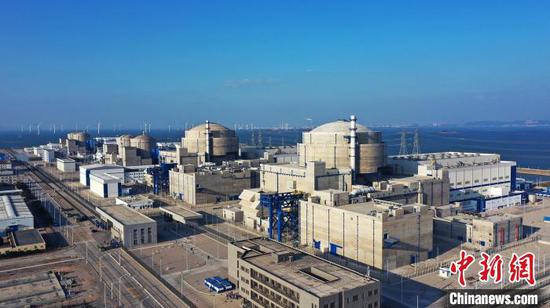 China's Hualong One demonstration project is completed and put into commercial operation on March 25, 2022. (Photo provided to China News Service by the Fuqing Nuclear Power Plant)

Independently designed and developed by China, the third-generation nuclear reactor is able to meet the highest international safety standards and fully possesses the capacity of mass construction.

The No.5 and No.6 units of the Fuqing nuclear power plant in east China's Fujian have adopted Hualong One and are expected to generate 20 billion kilowatt-hours of electricity, equivalent to a reduction of 6.24 million tons of standard coal consumption and 16.3 million tons of carbon dioxide emissions.

It will help improve China's energy structure, push low-carbon development and facilitate the targets of carbon peak and neutrality.

In addition, more than 5,300 enterprises have been involved in construction of the project, which has brought economic benefits and transformative opportunities to China's high-end equipment manufacturing industry.