The set has three coins, one in gold, one in silver and one in copper-alloy. All will be legal Chinese tender. 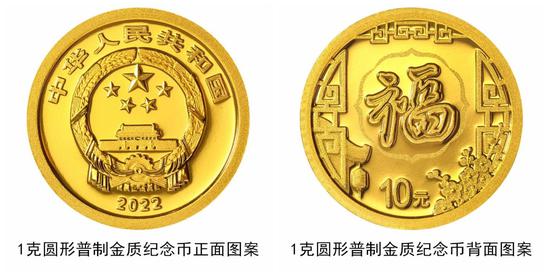 The gold coin, bearing the national emblem of China, the country's name and the number "2022" on its obverse, contains one gram of 99.9 percent gold and has the denomination of 10 yuan (about $1.57). Its reverse side is inscribed with the denomination and the Chinese character "Fu”, which means good fortune, and is decorated with classical Chinese elements.

The silver coin, whose pattern is almost the same as the gold one, contains eight grams of 99.9 percent silver and has the denomination of three yuan (about $0.47). Unlike the gold coin, the silver is engraved with Chinese characters "Ren Yin" on its reverse, symbolizing the Year of the Tiger.

As for the copper-alloy coin, the obverse contains China's country name, the denomination of 10 yuan and the number "2022", while the reverse is engraved with a tiger, the Chinese characters "Ren Yin" and other Chinese elements.

A maximum of 100,000 gold coins, 2 million silver coins and 120 million copper-alloy coins will be issued by the bank.

The reservation will be opened to the public from January 7 to 9, 2022.