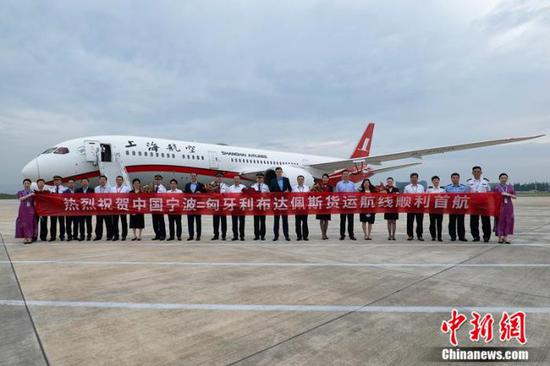 A cargo flight is ready to take off from the Ningbo Lishe International Airport in Zhejiang Province for Budapest on May 26, 2021. (Photo/China News Service)

(ECNS) -- A cargo plane took off from the Ningbo Lishe International Airport in East China's Zhejiang Province for Budapest on Wednesday, marking the official launch of a cargo route between the two cities.

It is also the first direct air cargo route to cities in Central and Eastern European countries (CEEC) from Ningbo Lishe International Airport.

Trade growth between Ningbo and CEEC, especially Hungary, increased rapidly in recent years. From January to April, Ningbo’s imports from 17 Central and Eastern European countries hit a record high, according to the Ningbo Customs.

The second China-CEEC Expo & International Consumer Goods Fair will be held in Ningbo from June 8 to 11.