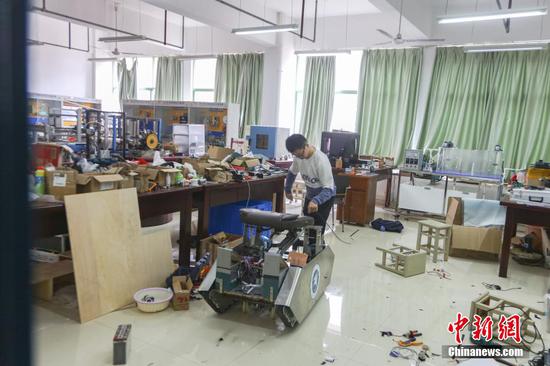 The intelligent stair-climbing wheelchair has two kinds of motion structures, one with wheels and the other with a track, said Liu Xin, the inventor.

Liu is a junior at Nanchang Hangkong University based in south China's Jiangxi Province. He was diagnosed with cerebral palsy at birth. Natural human behaviors like speaking, writing and walking are extremely difficult for him. After seeing the inconvenient campus life of a senior with paraplegia, he decided to create the automatic stair-climbing wheelchair.

"My wheelchair has two advantages, self-driving along the planned route and voice control," said the boy.

In 2020, his intelligent wheelchair project won the championship in the provincial mechanical innovation design competition for college students, then won first prize in the national competition and was granted the national invention patent.

Liu said he hopes his wheelchair will be promoted around the country. "I hope to create an automatic stair-climbing wheelchair that functions well at a low price to help more people and contribute to society," said Liu.