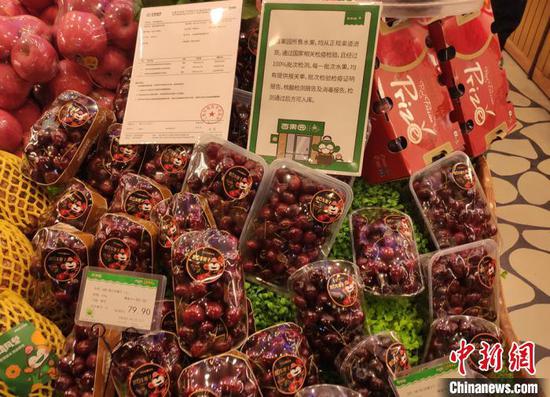 So-called "cherry freedom" was once a buzzword in China as imported cherries were costly and most people in the country could not afford them "without a second thought".

Although imported cherry prices were cut sharply, demand still plummeted over mounting consumer worries after samples of imported cherries were found to be COVID-19 positive. A half kilogram of imported 2J cherries had sold for more than 100 yuan (about $15.4).

Now, two kilograms of imported 1J cherries in a gift box sold for 99 yuan, and the equal weight of 2J cherries at 199 yuan at a fruit shop in Huishan District in Wuxi.

Yet most consumers just took a look at the fruit and passed by.

At another chain brand fruit store, cherries were placed at the entrance in a striking position. Next to the cherries there is a laboratory report from "CCIC Medical Diagnostic Testing Center (Shanghai)", informing consumers the imported fruit were COVID-19 free.

"This is to reassure consumers, as the pandemic has had a big influence on imported cherries," a fruit store salesperson said.

The headquarters of virus prevention in Liangxi District has launched an epidemiological investigation, quarantining those having come in close contact and conducting more nucleic acid sampling.