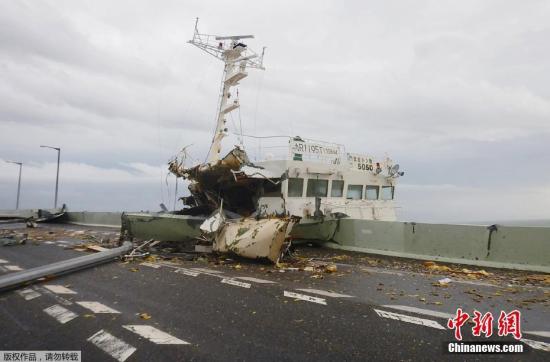 A passenger liner, under the influence of typhoon Jebi, bumps against a bridge that links Kansai International Airport and the land in western Japan, Sept. 4, 2018. (Photo/Agencies)

(ECNS) - The Chinese Consulate-General in Osaka has helped evacuate 1,044 Chinese tourists stranded by powerful typhoon Jebi as of Wednesday night.

The tourists, including 117 from Hong Kong, five from Macao and 32 from Taiwan, were transported from Kansai International Airport in six groups.

Approximately 3,000 tourists were stuck overnight at Kansai Airport in western Japan. On Wednesday, many of those stranded were rescued by bus or ferried by ship from the airport.

It was uncertain when the airport would reopen and some roads and train lines in the affected areas remained closed.

As of Wednesday evening, more than 400,000 homes in Kansai and Hokkaido remained without power.

Jebi is the most powerful storm to have hit Japan in 25 years, killing 11 people and injuring hundreds.