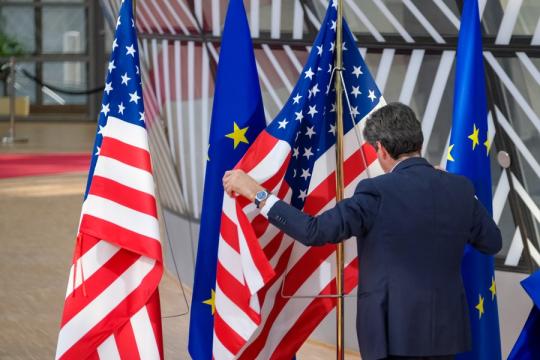 Divergences between the European Union and the United States are expected to deepen as EU countries have criticized the U.S.' Inflation Reduction Act, seeing it as a threat to the EU's economy, analysts said.

The act, which aims to speed up the U.S. transition to a low-carbon economy, contains around $370 billion in subsidies for green energy, as well as tax breaks for U.S.-made electric cars and batteries.

EU member countries have said the act might lure away EU businesses and put European companies, from car manufacturers to green technology enterprises, at a disadvantage.

During a meeting of the U.S.-EU Trade and Technology Council on Monday, officials of both sides met for trade and technology talks but makes only "preliminary progress".

Giancarlo Giorgetti, Italy's minister of economy and finance, called on Monday for the EU to take a common approach to support competitiveness and protect strategic production, in order to counter the subsidies in the Inflation Reduction Act.

EU Internal Market Commissioner Thierry Breton earlier threatened to appeal to the World Trade Organization and consider retaliatory measures if the U.S. did not reverse the subsidies.

Chen Fengying, a senior researcher on the global economy at the China Institutes of Contemporary International Relations, said that since the outbreak of the Russia-Ukraine conflict in February, EU member countries have followed in the footsteps of the U.S. in imposing sanctions on Russia, although these moves have also harmed their own economies by causing soaring energy prices and higher costs of living.

Despite this, the U.S. "makes a profit from selling energy and has introduced the (Inflation Reduction Act), which will hurt the European economy. No wonder the EU countries have expressed strong dissatisfaction," she said.

In a recent interview with the Italian newspaper Corriere Della Sera, European Council President Charles Michel said that the impact of the Russia-Ukraine conflict in the U.S. is not the same as for the EU.While the U.S., as an exporter of energy resources, can benefit from soaring oil and gas prices, the EU pays a heavy price, is now at risk of a recession and faces competition from U.S. industries, he said.

Chen said that the enactment of the Inflation Reduction Act shows that the U.S. is determined to bring manufacturing companies back to the country.

"Industrial subsidies are of vital interest to both the U.S. and Europe, and while the U.S. does not want to damage its relationship with Europe over this issue, it is unlikely to make any substantive concessions. As a result, transatlantic relations are likely to remain strained over the issue for some time to come," Chen said.

He Yun, an associate professor at Hunan University's School of Public Administration, said that the Inflation Reduction Act aims to subsidize green technologies made in the U.S., but not those that are imported. This will give domestic producers an advantage, which "will have a massive adverse impact on the European economy", she added.

On the one hand, the U.S. is the largest destination for EU exports, so subsidies will make European exports of such things as electric cars and batteries less competitive compared with those that are produced in the U.S., she said. On the other hand, because of high energy prices, many European companies are already moving their production to the U.S., and the Inflation Reduction Act will accelerate the exodus and leave European manufacturing in an ever weaker position.

"As a result, the bill is perceived in Europe as discriminating and breaking WTO trade rules," she said, adding that whatever happens, the bill will bring more trade friction between the U.S. and Europe and deepen bilateral mistrust.