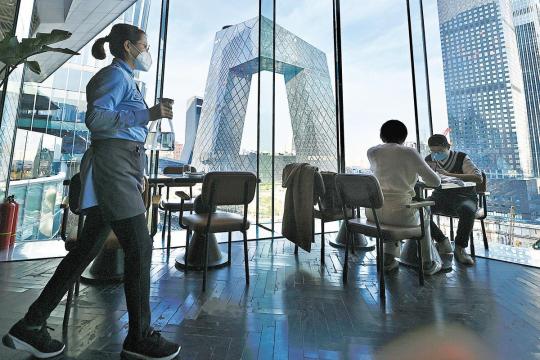 A waitress wearing a mask serves two customers at a table in a restaurant in Beijing's Chaoyang district, Dec 7, 2022. (Photo by Wei Xiaohao/chinadaily.com.cn)

The National Health Commission published a total of 10 new guidelines for COVID-19 pandemic prevention and control on Wednesday to optimize the country's response to the public health crisis that has lasted almost three years.

That asymptomatic cases and people with mild symptoms are allowed to quarantine at home instead of at quarantine centers or hotels means the country will focus its attention on treating the severe cases.

That is a timely adjustment in line with not only people's expectations but also changes on the ground, with most infections being asymptomatic or mild ones requiring no special treatment, making the earlier strict quarantine measures outdated.

The move means the novel coronavirus will no longer be treated as a dangerous disease on a par with bubonic plague and cholera — the social and economic cost of doing that for three years in a country with a 1.4 billion population has been tremendous. The relaxations come as huge relief for the whole nation, including the health workers who have been serving on the frontline in the "people's war" against the virus.

Now it is time for the nation to update its knowledge about the virus, and learn to live with it while trying its best to return socioeconomic activities back to normal.

It is not surprising that after relentlessly following the virus control measures for years, some people are still hesitant to enjoy the autonomy they seem to have been granted overnight. Although some cities have lifted strict control measures, residents are still reluctant to leave their homes.

The country needs to ease people's psychological anxieties and offer mental health counseling to children in particular, as three years is a long time for children and they have been living in fear of the virus for far too long.

At the same time, the empty shelves at drugstores and in some supermarkets should serve to spur the authorities to demonstrate the same efficiency they did in setting up testing centers and mobilizing resources to the supply of medicines for fever and anti-inflammatory drugs and other basic necessities to help the nation tide over this transition period.

The later half of the war against the virus still requires close cooperation among government, industries and society.