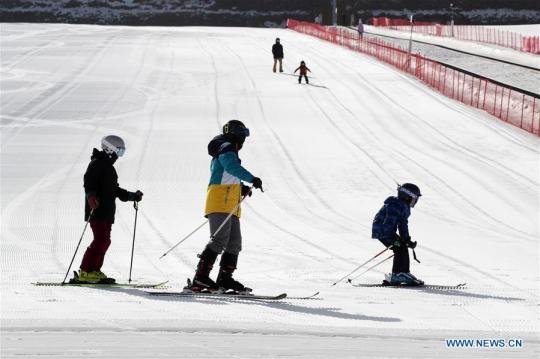 Most of the ski resorts in Zhangjiakou, Hebei province, that held snow events for the 2022 Winter Olympic Games have opened to the public since early last month, and have seen a boom in winter sports in the first snow season since the Olympics.

Six major ski resorts in the city's Chongli district have opened to skiers, including Genting Snow Park, which was a major venue for the Beijing 2022 Winter Olympic and Winter Paralympic Games.

It has opened six snow slopes and play areas for kids, according to Hebei Daily. Five other slopes for halfpipe, slopestyle, parallel giant slalom, ski or snowboard cross and moguls will open to skiers in mid to late December.

For the new snow season, the resort has rolled out a series of measures to mitigate the transmission risk of COVID-19, such as self-service ticket purchasing machines.

Upon arriving in Chongli, visitors are required to take a nucleic acid test, according to the local government.

"I wanted to experience the slopes that have witnessed the Winter Olympic Games," she said. The 33-year-old office worker has been a frequent visitor to ski resorts in Chongli in recent years.

"Many of my friends who didn't know how to ski have started showing interest in skiing since they watched the wonderful ski competitions during the Games," Liu said, adding that she has been asked a lot about skiing skills and good ski resorts.

"Winter sports have developed into popular sports from being only tried by a minority of people in the past," Zou Zhongqiao, a manager at Fulong Four Seasons Town, another ski resort in Chongli, was quoted as saying by Great Wall New Media, a media outlet based in Shijiazhuang, Hebei province.

Zou said children as young as three or four years old and elderly people as old as 70 or 80 have all participated in snow and ice sports in the past two years.

He added more than 3,000 skiers visited the resort on its first day.

Wanlong Paradise Resort, another major ski resort in Chongli, has received 800 to 1,000 people a day recently.

"Here we can not only experience the slopes that were used by world champions, we can also enjoy the sites related to the Winter Olympics," Liu said.