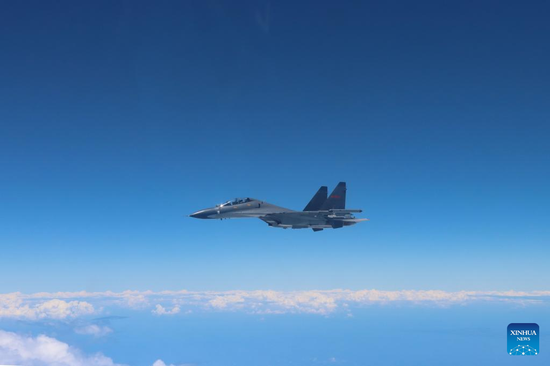 A warplane of the Eastern Theater Command of the Chinese People's Liberation Army conducts operations around the Taiwan Island, Aug 4, 2022. (Photo/Xinhua)

China strongly opposes a report on Chinese military development released by the United States, which distorts China's national defense policy and military strategy, a spokesman for the Ministry of National Defense said in a statement on Tuesday.

Senior Colonel Tan Kefei was responding to the 2022 Report on Military and Security Developments Involving the People's Republic of China, which was issued by the U.S. Department of Defense in late November.

China has lodged solemn representations to the U.S. over the report, he said.

Tan said that the U.S. report made groundless assumptions about China's military development and wantonly interfered in China's internal affairs in terms of the Taiwan question, which is a "conventional trick" to hype up a so-called Chinese military threat theory.

"China is committed to the path of peaceful development and a national defense policy that is defensive in nature," he said. "China has always been a builder of world peace, a contributor to global development and a defender of the international order."

The spokesman made a comparison between the national defense policies of China and the U.S..

China's military development aims to safeguard its sovereignty, security and development interests, Tan said, stressing that "no matter how developed it is, China will never seek hegemony or engage in expansion".

"However, the U.S. has been free of war for only 16 years in the nearly 250 years since its founding," he said. "It has stirred up trouble for its own selfish interests and created division and confrontation worldwide, bringing turmoil and disaster wherever it goes."

Tan said the facts have proved time and again that the U.S. is the "biggest troublemaker and destroyer of world peace and stability".

The defense official refuted the Taiwan-related content in the report, saying the island is part of China and that the Chinese people are the ones who must resolve the Taiwan question.

"At present, some people in the U.S. cling to the fantasy of containing China by using Taiwan, and the island's Democratic Progressive Party authorities are attempting to seek 'independence' by relying on the U.S.," he said. "Those are the root causes of tension across the Taiwan Straits."

Tan emphasized that China is committed to maintaining peace and stability across the Straits, but will never promise to renounce the use of force and reserves the option of taking all necessary measures.

"The Chinese armed forces have the confidence and capability to thwart any external interference and separatist attempts for 'Taiwan independence' and to achieve the complete reunification of the motherland," he warned.

"The U.S. continues to upgrade its trinity nuclear force, vigorously develop and seek forward deployment of tactical nuclear weapons and lower the threshold for the use of nuclear weapons," he said, noting that the U.S. has conducted nuclear proliferation through its trilateral security partnership with the United Kingdom and Australia.

Tan emphasized that China firmly pursues a self-defensive nuclear strategy, adheres to the policy of no "first use of nuclear weapons at any time and under any circumstances", and keeps its nuclear forces at the minimum level required for its national security.

The spokesperson urged the U.S. to abandon its Cold War mentality, correct its wrong perception of China, view China's national defense and military building in an objective and rational way, and take concrete steps to steer the relationship between the two countries and militaries back to the path toward sound, stable development.