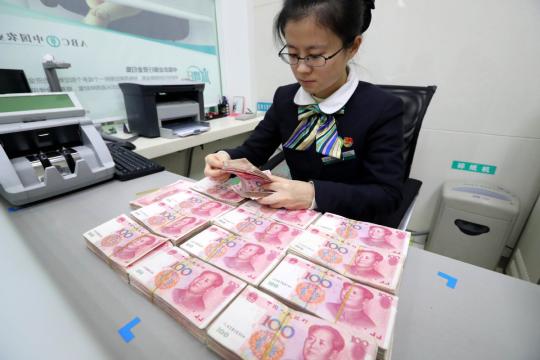 A clerk counts cash at a bank in Huaibei, Anhui province. (Photo provided to China Daily)

"In the future, with the growing confidence and experience in dealing with foreign investors in the past 20 years, we expect to see more relaxation of the entry requirements by the Chinese securities regulator, such as adopting a filing system, instead of requiring foreign investors to obtain approval for QFII status.

"The regulator is expected to be more focused on the supervision of foreign investors' investment behavior in the market. In the next two or three years, we hope respective regulators may also release more detailed rules on the implementation of eligible products available to QFII program participants," said Li during a recent interview.

Launched by the Chinese government in 2002, the QFII program enables qualified foreign institutional investors to gain direct access to trade Chinese A shares, denominated in renminbi, on Chinese stock exchanges.

Currently, the types of investments that can be traded as part of the QFII system include listed stocks, treasury bonds, corporate debentures, convertible bonds, commodity futures and other financial instruments as approved by the China Securities Regulatory Commission.

Over the last 20 years, participants of the program expanded from qualified foreign institutional investors registered in the US, Europe and Hong Kong to those in more than 40 markets, including some countries and regions involved in the Belt and Road Initiative. The types of participants expanded from investment banks to sovereign wealth funds, mutual funds, emerging market funds, hedge funds and those investing in commodity futures, Li said.

"It is anticipated that the Chinese government may take the QFII program as a channel to allow more types of foreign institutional investors to invest in China. They will enrich the structure of China's capital market and bring advanced investment philosophies and techniques to the country. As a result, domestic institutional investors and regulators will become more familiar with the most advanced investment methodology and behaviors of foreign financial institutions," he said.

Many overseas long-term investment institutions like sovereign funds hired investment managers or advisors when they entered the China market, given that they are not as familiar with this market as local institutional investors.

With a deepened understanding of the China market, foreign institutional investors started checking some companies listed on China's Nasdaq-style STAR Market and the Growth Enterprise Market that represent the future of Chinese technologies, instead of simply focusing on blue-chip stocks. Some investors also began to pick stocks abiding by ESG (environmental, social and governance) investing principles, Li said.

During the process, listed Chinese companies improved corporate governance, which strengthened foreign investor confidence in the China market, he said.