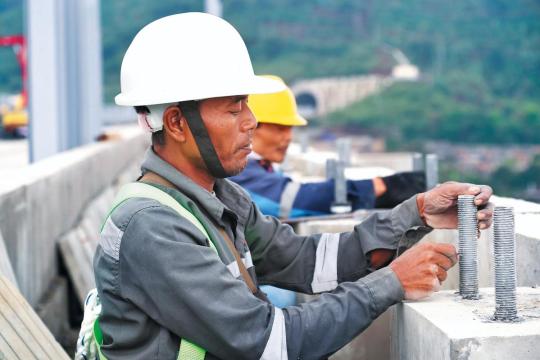 Builders from China Railway No 4 Engineering Group Co Ltd work at a construction site of the Jakarta-Bandung High-Speed Railway, which is expected to operate in Indonesia by June 2023. (HAN XINLIANG/FOR CHINA DAILY)

With a 900-metric-ton beam being safely positioned along the No 24 Bridge on the Jakarta-Bandung High-Speed Railway on Oct 16, all the box beams on the line had been successfully installed, meaning that track-laying work can begin.

At present, all 13 tunnels for the HSR in Indonesia are fully connected, laying a solid foundation for its planned operation by June 2023, said Han Xinliang, a publicity official from China Railway No 4 Engineering Group Co Ltd.

The $8-billion Jakarta-Bandung HSR, as Chinese HSR's first systemic footprint overseas and the first HSR in Indonesia as well as in Southeast Asia, is a signature link of the Belt and Road Initiative.

Tailor-made high-speed trains had arrived in Indonesia by Sept 1 from China, said Han in Indonesia.

The HSR needs a total of 2,558 box beams on its 142.3-kilometer line, which were precast by the No 1, No 3 and No 4 prefabrication yards set up by Chinese builders.

Upon full operation, the HSR can slash travel time between the two regions from the current three hours to just 40 minutes.

The HSR will have four stations — Halifax Station in Jakarta, and Karawang, Walini and Tegalluar stations in West Java. A world-famous harbor, Jakarta is the largest city in Southeast Asia, while Bandung is Indonesia's fourth-largest city.

Han urged the builders to enhance the company's brand overseas, and expand business in Indonesia and Southeast Asia.

Song Heng, deputy publicity chief of CREC4, said the HSR is a flagship project supported by the synergy between the BRI and Indonesia's Global Maritime Fulcrum.

During the 72 years of diplomatic ties, the bilateral relationship has experienced significant improvements in various aspects, with bilateral trade in the first eight months of this year reaching $95.7 billion, he said.

Chen Zihua, another publicity official from CREC4, said that with the report delivered at the 20th National Congress of the Communist Party of China, which stated that "high-quality development of the Belt and Road Initiative" will be promoted, Chinese enterprises are fully optimistic about BRI advancement overseas.