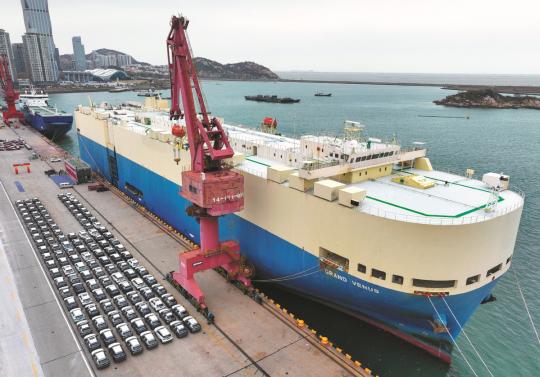 Despite greater complexity and uncertainties in both domestic and global markets, the steady and qualitative improvement trend of China's foreign trade will remain unchanged in the coming months, said the country's top foreign trade and investment promotion agency on Tuesday.

China's foreign trade recorded steady progress during the January-October period, with both imports and exports hitting record highs. However, amid softening global demand, geopolitical issues, sporadic outbreaks of COVID-19 and other elements, the growth rates for monthly trade have slowed down in recent months, which is in line with global economic and trade trends, Sun Xiao, spokesman for the Beijing-based China Council for the Promotion of International Trade, or the CCPIT, said at a monthly news conference.

China's foreign trade, in US dollar terms, declined 0.4 percent on a yearly basis to $511.59 billion in October, said the General Administration of Customs.

Given the increasingly complicated external environment, uncertainties, a high base of comparison from 2021 and anemic external demand, there is still pressure on China's foreign trade sector in the fourth quarter, said Sun, who is also secretary-general of the China Chamber of International Commerce, or the CCIC.

Though facing headwinds, there is solid support for the growth of China's foreign trade sector. It has developed sound foundations and businesses have a stronger capacity to accelerate the pace of both industrial upgrading and innovation, he said.

In addition to facilitating more export-oriented companies in further understanding favorable terms of multilateral and bilateral free-trade deals such as the Regional Comprehensive Economic Partnership agreement, the CCPIT said that it will help domestic companies to seize more orders in the global markets in the rest of the quarter and next year.

"We will support the participation in various trade and business fairs in overseas markets, pay close attention to new trends in the global economy and new demands of Chinese exporters, and leverage the advantages of digital platforms to help them connect with overseas customers accurately," he said.

As the Office of the US Trade Representative announced in early September its statutory four-year review of Section 301 tariffs imposed on Chinese goods on July 6 and Aug 23,2018, Sun said that the CCPIT and the CCIC will closely watch the review and investigation, urge the government of the United States to listen to the views of all parties and conduct the investigation objectively, fairly and impartially.

"Since the US imposed tariffs on $360 billion worth of Chinese goods under the US Section 301 in 2018, it has not only severely damaged normal economic and trade exchanges between China and the US, but it also put more costs and inflationary pressure on US manufacturers, workers and consumers, and led to unfair competition," he said.

This review should be an opportunity for the US to terminate such an irresponsible practice, Sun said.

Days after the US announced a tariff exemption extension on a number of Chinese goods, the Customs Tariff Commission of the State Council announced in a statement on Monday that China will continue to exempt certain US goods from additional tariffs until May next year.

According to a previous statement issued in April this year, certain items from the US were excluded from the tariff countermeasures against the US Section 301 measures until Wednesday. After the extension, the exemption will last until May 31, 2023, the commission said in a statement.

With policies to stabilize foreign trade continually being introduced and the notable rise in international flights, foreign trade will remain within a reasonable range in the fourth quarter, Shu Jueting, spokeswoman for the Ministry of Commerce, said at a regular news briefing in mid-November.

"With China entering a new era of green and innovation-led growth, its comprehensive competitive advantage in industrial support, human resources and infrastructure will not change, and the expectations and confidence of foreign investors in long-term investment and operations in its vast market will not change," said Cui Fan, a professor at the University of International Business and Economics.

Eager to boost foreign trade, China announced last week that it has approved the establishment of comprehensive pilot zones for cross-border e-commerce in another 33 cities and regions.

This is the seventh batch of such pilot areas, which lifted the tally to 165 across the country.