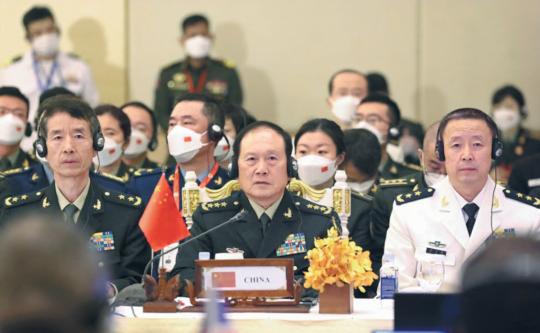 State Councilor and Defense Minister General Wei Fenghe called on Wednesday for world solidarity and fairness instead of division and hegemony, as he told his counterparts from Southeast Asia and Asia-Pacific countries that world peace is facing major challenges.

Wei made the remarks in his speech at the 9th ASEAN Defense Ministers' Meeting Plus held in Cambodia, which brought together defense ministers from ASEAN and its dialogue partners — Australia, China, India, Japan, New Zealand, the Republic of Korea, Russia and the United States.

In the face of major challenges to world peace and development, the right direction to take is to build a community with a shared future for mankind, which is also where the world's future lies, Wei said.

He urged all countries to be united rather than divided, fair rather than hegemonistic, open rather than closed, and mutually beneficial rather than selfish, so as to jointly shape and maintain a regional order that balances the concerns of all parties and serves their interests.

Wei also said that the Chinese military is willing to work with the militaries of other countries to continue contributing to world peace.

China does not covet the interests of other countries, but its resolve to defend its own interests is as firm as a rock, the general stressed, reiterating China's position on the Taiwan question.

He said Taiwan is part of China and resolving the Taiwan question is a matter for the Chinese, adding that the Chinese military is unyielding, assured, confident and able to defeat any intruders.

Wei pointed out that the security situation in the Asia-Pacific region remains stable, but there are certain concerns. He told the conference that the defense departments of all countries should uphold the central role of ASEAN, follow the Global Security Initiative, focus on practical cooperation and work together to build a solid barrier for universal security.

Liu Lin, a researcher at the People's Liberation Army Academy of Military Science, said the security concerns in the Asia-Pacific region that Wei mentioned mostly result from the U.S., which has been increasing its presence in Southeast Asia in recent years to compete with China.

"The U.S. has been attempting to what it calls 'shape the strategic environment' around China by building security frameworks in Southeast Asia and the Asia-Pacific", Liu said, pointing to the AUKUS alliance with the United Kingdom and Australia, and the Quadrilateral Security Dialogue, which involves three Asia-Pacific countries — Australia, Japan and India.

That has increased security uncertainty in the region, which is why Wei highlighted the unity of all countries and called for upholding the central role of ASEAN in his speech, Liu said.

"China values the role of ASEAN much more, which has an independent and self-determined diplomacy," she said. "The regional bloc emphasizes a balance between China and the U.S., benefiting China-ASEAN defense cooperation a lot and bringing huge potential and space for it."

China's ties with ASEAN are one of the priorities of the country's neighborhood diplomacy, which China pays great attention to, Liu said. Deepening defense cooperation between China and ASEAN would benefit regional peace and stability, particularly in the South China Sea, and enhance mutual trust between China and ASEAN countries, she added.

On the sidelines of the ADMM-Plus, Wei also met with defense ministers or representatives of the U.S., Vietnam, Laos, Australia, New Zealand, the Republic of Korea and Russia, and discussed strengthening bilateral military cooperation and issues of common concern, said the Defense Ministry.