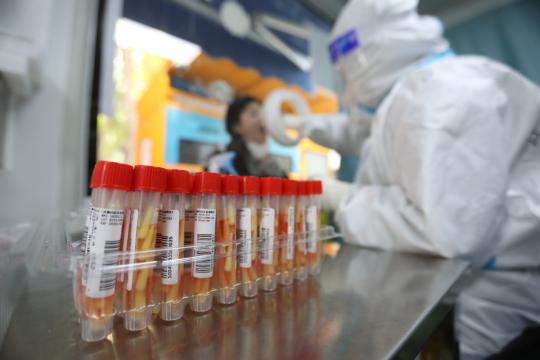 A medical worker takes a swab sample from a resident for nucleic acid testing in Beijing, on Nov 16, 2022. (Photo/Xinhua)

Beijing will tighten its COVID-19 control measures starting on Thursday by requiring negative COVID test results no older than 48 hours to enter public places, as it confronts the recent large rise in infections, a senior official said on Tuesday.

All people are required to show negative results on nucleic acid tests taken within 48 hours before entering government departments, office buildings, supermarkets and other public places, as well as before taking buses and riding on the subway, Xu Hejian, spokesman for the municipal government, said at a news conference on Tuesday.

"The current virus variant is extremely infectious and easily concealed, and the city's control and prevention work is currently at the most critical stage," he said.

Authorities also suggested that the elderly and the young be vaccinated as soon as possible in order to protect them.

"The percentage of fully vaccinated people among infected seniors, age 60 and above, is relatively low. While less than 30 percent of infected people age 80 and older have been vaccinated," said Liu Xiaofeng, deputy director of the Beijing Center for Disease Control and Prevention at the news conference.

Liu added that of the two people found to be in severe condition with COVID, neither had been vaccinated.

Beijing has seen infections rise, with 274 local confirmed cases and 1,164 asymptomatic carriers identified on Monday, according to the city's health commission.

It was the first time since the start of the COVID-19 pandemic that the number of infections in the capital surpassed 1,000 in a single day. Of the 274 confirmed cases, 207 were detected in community testing.

In consequence, a number of parks and museums in the capital, including Beijing Olympic Park, Beijing Wildlife Park and the Summer Palace, have announced the temporary closure of either their whole areas or indoor areas starting from Tuesday.

Guangzhou in Guangdong province, Chongqing and Beijing ranked top three in infection numbers, including both confirmed cases and asymptomatic carriers. 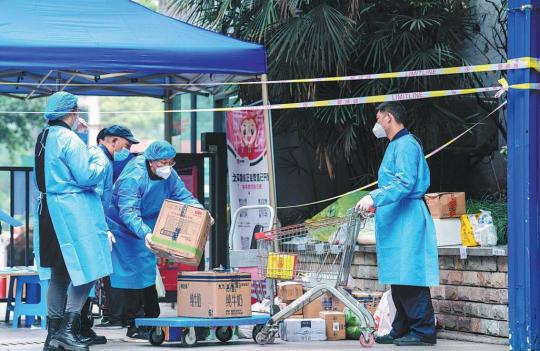 During an inspection of Chongqing on Monday, Vice-Premier Sun Chunlan stressed the importance of taking immediate action to curb the spread of COVID-19 in the city.

Sun urged immediate, resolute and decisive measures to cut off the transmission chain and contain the virus more quickly to shield economic and social development and people's well-being to the greatest possible extent.

The ongoing COVID-19 outbreak in Chongqing has spread widely. Although prevention and control work led by the local government has achieved positive results, the situation remains complex and grave, with infections still on the rise.

An analysis in Chongqing found that more than 60 percent of infections identified in the city's high-risk areas and outside the quarantined areas involve people living in the same building, neighborhood or residential community, indicating loose control, said Li Pan, deputy director of the municipal health commission.