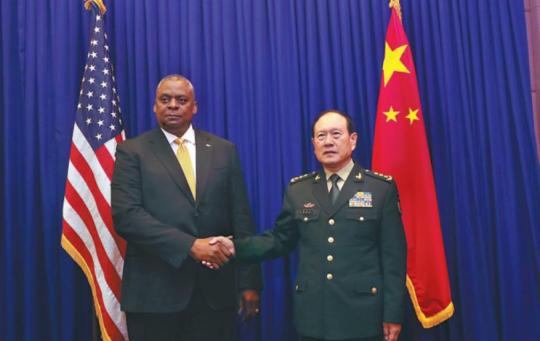 The United States must respect China's core interests with the Taiwan question at the very core, State Councilor and Defense Minister General Wei Fenghe told his U.S. counterpart Lloyd Austin in their meeting in Cambodia on Tuesday.

The meeting took place at the request of the U.S. side on the sidelines of the 9th ASEAN Defense Ministers' Meeting-Plus. It was the second face-to-face meeting between Wei and Austin, as well as the first meeting after China-U.S. relations were damaged by the widely criticized Taiwan visit in August of U.S. House Speaker Nancy Pelosi.

General Wei said the responsibility for the current state of China-U.S. relations lies not with China but with the U.S. side, which has erred in its strategic appraisal, noting that China values the relations of the two countries and militaries, but the U.S. must respect China's core interests, according to the news release by the Ministry of National Defense.

The senior defense official said President Xi Jinping and U.S. President Joe Biden reached a series of important consensuses during their talks on the sidelines of G20 Summit, charting the course for the development of China-U.S. relations.

In the meeting with Xi in Indonesia, Biden said the U.S. does not support "Taiwan independence", "two Chinas" or "one China, one Taiwan", and it has no intention of having a conflict with China.

Wei urged the U.S. side to keep its word and honor its commitment, truly implement the consensuses reached by the two presidents, and adopt a rational and pragmatic China policy, so as to remove causes of crisis.

He underlined that the Chinese military is unyielding, assured, confident, and able to resolutely safeguard national reunification.

During the talks, the two sides agreed that their two militaries should earnestly implement the important consensuses reached by the two presidents, maintain engagement and communication, strengthen crisis management and control, and strive to maintain regional security and stability.

The two defense chiefs also exchanged views on international and regional situations, including the Ukraine crisis and the South China Sea and Korean Peninsula issues.

At the news briefing after the meeting, Senior Colonel Tan Kefei, spokesman for the Chinese Defense Ministry, said the meeting had achieved positive results.

"The meeting was a strategic communication that is sincere, in-depth, practical and constructive," he said. "It was a concrete measure to implement the important consensuses reached between the two presidents, and is of great significance for bringing the ties between the two militaries back to the track of healthy and stable development.

"In general, this meeting has been conducive to both sides increasing mutual understanding and avoiding misjudgment."

Liu Lin, a researcher at the People's Liberation Army Academy of Military Science, said the Chinese side has shown its firm position on the Taiwan question in the meeting and meanwhile both sides sent an important message that crisis management should be further enhanced.

"The Taiwan question is of great significance in China-U.S. relations, especially in the ties between the two militaries," she said. "However, nowadays the possibility of conflicts and crises between the two armies has been increasing, since they have engaged with each other in the Taiwan Straits more often after the U.S. has frequently sent its warships and warplanes to act in this area in recent years.