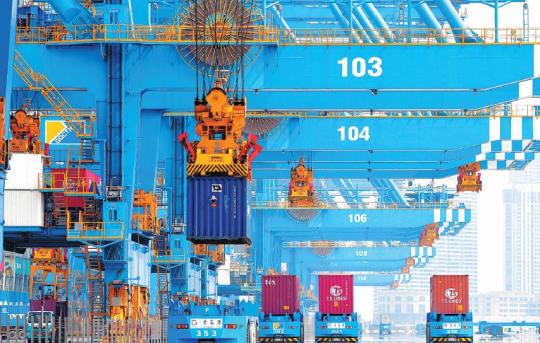 China's efforts to expand high-level opening up and its deepened involvement in forming multilateral rules for trade in services will bolster global economic growth and enrich its dual-circulation development paradigm, experts said.

"Dual circulation" refers to China's new development pattern in which the domestic market is the mainstay and the domestic and overseas markets reinforce each other.

While actively joining in bilateral and regional trade agreements in the field of trade in services, China must present its needs amid its economic transformation to further integrate in global trade and become an active participant in rule-making, said Zhang Fei, vice-president of the China Institute for Reform and Development, which is based in Hainan.

"Under such circumstances, it is vital to support the roles of the World Trade Organization, the G20 and other multilateral agreements. These moves will help promote the multilateral trading system and digital trade rules across the world," he said.

Pushed by fast-growing business sectors, such as knowledge-intensive services and foreign culture trade, the total value of China's trade in services jumped 20.4 percent year-on-year to 3.94 trillion yuan ($543.33 billion) in the first eight months of this year, Ministry of Commerce data show.

As China pledged to advance the optimization and upgrading of trade in services, it is necessary to innovate the development mechanism of this trade and to develop digital trade, said Wang Jiaqiang, a senior research fellow at Bank of China Research Institute.

Amid efforts to promote industrial digitization and other digital related businesses, China is advancing the process of joining the Digital Economy Partnership Agreement and strengthening international cooperation on the digital economy.

Daniel Gros, a board member of the Center for European Policy Studies and also an adviser to the European Parliament, said as trade in services will be the future development trend in globalization, China's opening up will continue to boost the strength of the country's growth in this area and attract more foreign capital.

Foreign capital expended in China reached more than 1 trillion yuan between January and September of 2022, surging 15.6 percent year-on-year, said the Ministry of Commerce.

To remove global trade barriers, Masakazu Toyoda, chairman and CEO of the Japan Economic Foundation in Tokyo, said China is an important contributor to the multilateral trading system with the WTO at its core, and it will make economic globalization more open, inclusive, balanced and beneficial to all.

"As long as all WTO members show the resolve to work together to overcome difficulties, the organization will play a bigger role in improving global economic governance, promoting economic globalization and world economic prosperity and stability," he said.