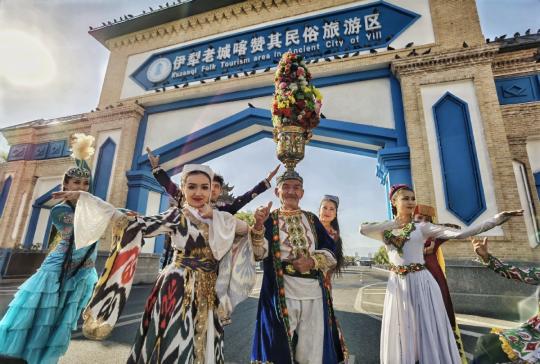 Politicizing human rights and practicing double standards are deeply unpopular and attempts to use Xinjiang Uygur autonomous region-related issues to suppress or contain China will get nowhere, officials and scholars said after the United Nations human rights body rejected a Western bid to debate such issues.

The 51st session of the Human Rights Council on Thursday voted down a United States-led draft decision calling for a debate on a report at its next session in March. The report was issued by the Office of the UN High Commissioner for Human Rights in August and assessed so-called human rights concerns in Xinjiang.

"The US and some other Western countries have been misinforming the public about Xinjiang and seeking political manipulation in the name of human rights simply to smear China's image and contain China's development," a Foreign Ministry spokesperson said on Thursday.

The draft decision was an attempt to use UN human rights bodies as a tool to interfere in China's internal affairs and use Xinjiang to contain China, the spokesperson added.

Before the vote, Chen Xu, China's permanent representative to the UN Office in Geneva, said the US-led countries attempted to justify the unauthorized and illegal "assessment" to put Xinjiang-related issues that do not exist at all on the agenda of the council, which is another example of politicization and instrumentalization of human rights issues.

China has stressed multiple times that Xinjiang-related issues are not about human rights but about countering violent terrorism, radicalization and separatism.

According to the spokesperson, there has been no violent terrorist incident in Xinjiang for over five consecutive years. The human rights of people of all ethnic backgrounds in Xinjiang are protected like never before.

Nearly 100 countries, including many Islamic nations, have in recent years spoken out on various occasions including to the Human Rights Council to support China's just position on Xinjiang-related issues.

The international community is clearly aware of the motives of several countries regarding their Xinjiang narrative and "will not be easily misled", the spokesperson said.

"The draft decision ended up unsupported by the majority of the Human Rights Council membership, especially many developing nation members," the spokesperson added, despite pressure from the US and other Western countries.

The spokesperson urged the council to focus on serious human rights violations by the US and some Western forces while demanding they abandon political manipulation, disinformation and suppression.

According to a news release by China's permanent mission to the UN Office at Geneva, developing countries such as Pakistan and Cuba said at the meeting that Xinjiang-related issues are China's internal affairs which brook no external interference.

They also criticized certain countries for politicizing human rights issues and provoking confrontation, which will seriously undermine dialogue and cooperation on human rights.

"This is a victory for developing countries and a victory for truth and justice," Assistant Foreign Minister Hua Chunying said via social media following the vote. "Human rights must not be used as a pretext to make up lies and interfere in other countries' internal affairs, or to contain, coerce and humiliate others."

John Ross, a senior fellow at the Chongyang Institute for Financial Studies at Renmin University of China, noted that most countries at the UN refuse to go along with US falsification of Xinjiang.

Diao Daming, an associate professor of US studies at Renmin University of China, said, "The US approach, namely telling others to take the medicine for its own illness, is doomed to fail, and China's achievements in human rights protections are for all to see."

Diao said Washington is not qualified to point fingers at other countries as it has poor track records on human rights such as systemic racism, rampant gun violence as well as abusive use of unilateral sanctions and force.

"Instead of getting its house in order, Washington, out of a Cold War mentality, leaves no stone unturned to contain China, which shows its typical double standards and hegemony," Diao added.