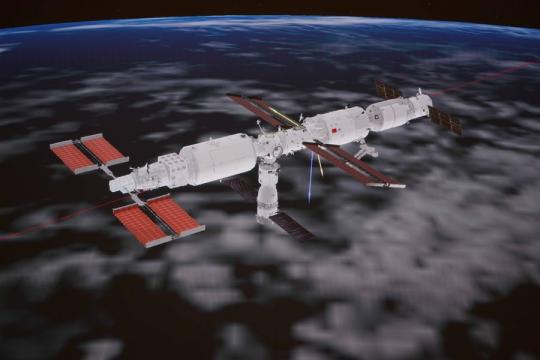 Simulated image captured at on July 25, 2022 shows that Wentian lab module has docked with the front port of Tianhe core module combination. (Photo/Xinhua)

The Wentian lab module of China's Tiangong space station has been repositioned to dock with a radial port on the station's Tianhe core module on Friday afternoon, which marked a key step in Tiangong's in-orbit assembly, according to the China Manned Space Agency.

The agency said in a news release that during the hour-long operation that finished at 12:44 pm, Wentian was moved from the axial port of Tianhe to a radial port of the core module. The maneuver was carried out based on cooperation between astronauts inside the Tiangong and ground controllers.

After the operation, the Tiangong station is now L-shaped and will remain in that shape until the docking with the Mengtian lab module that is scheduled to be launched around year's end, the agency noted.

Wentian was launched in late July from the Wenchang Space Launch Center in Hainan province to connect with the Tianhe core module.

With its 23-ton weight and 17.9-meter length, Wentian is currently the largest and heaviest spacecraft China has ever built and also the world's heaviest self-propelled spaceship in service.

Inside the gigantic lab, there are eight scientific cabinets. They are mainly used to serve biological and life science studies and can support research on the growth, aging and genetic traits of plants, animals and microbes in the space environment.

By now, three groups of Chinese astronauts have lived and worked inside the Tiangong space station, which now consists of the Tianhe module, the Wentian lab, the Shenzhou XIV spacecraft, and the Tianzhou 4 cargo ship.

The current habitants – the three crew members of the Shenzhou XIV mission – have spent nearly four months in it and have carried out two spacewalks. They are to stay in the station until early December, when the Shenzhou XV crew will take over.

The Mengtian space lab, Tiangong's second lab component, is scheduled to be launched in October.

Scientific equipment onboard will be used for microgravity studies and to carry out experiments in fluid physics, materials science, combustion science and fundamental physics, mission planners have said.

Once Mengtian is connected to Tiangong, the station will be T-shaped and astronauts will have as much as 110 cubic meters of usable space.