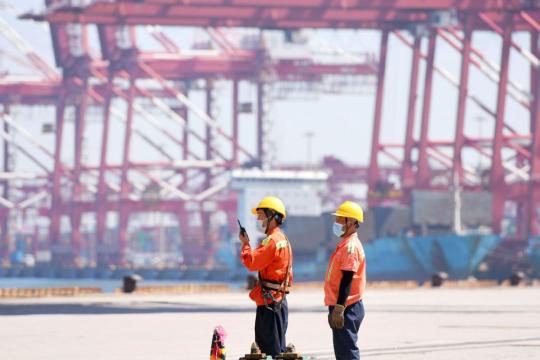 Despite softer overseas demand, China's foreign trade is expected to grow during the second half of the year and help fuel the upward momentum of the Chinese economy, a senior commerce official said on Tuesday.

Wang Shouwen, vice-commerce minister and China international trade representative at the Ministry of Commerce, made the remarks at a news conference in Beijing.

"A slowdown in external demand is the most significant uncertainty facing China's foreign trade," he said. As major developed economies are staggering and global trade growth has weakened, new orders for both Chinese enterprises and their counterparts in other countries are declining, he said.

However, China's foreign trade sector is expected to grow steadily on the back of pragmatic facilitating measures at both central and local levels, sound fundamentals of the sector, and increasing competitiveness of Chinese products in high-value and high-tech industries, he said.

Free trade agreements such as the Regional Comprehensive Economic Partnership will also help promote the development of China's foreign trade, he said.

In August, China's exports to other RCEP member countries surged 23 percent year-on-year, which was 11.2 percentage points higher than the overall export growth rate.

Yet, the annual growth pace in August was 8.6 percent, down nearly 8 percentage points from that in July.

Following a series of policy measures rolled out to stabilize foreign trade growth, the MOC unveiled a new circular on Tuesday, detailing specific moves to help enterprises smoothen all links of export and import activities.

In particular, the circular asked local governments to strengthen support for foreign trade enterprises in COVID prevention and control, energy consumption, labor recruitment and logistics, and also "make every possible effort when necessary to help enterprises fulfill their contracts".

The circular also urged the authorities concerned to further the development of innovative foreign trade development platforms, tap the potential of cross-border e-commerce to stabilize foreign trade and facilitate foreign trade through measures like improvements to ports and domestic logistics efficiency and elimination of unnecessary fees.

Gao Lingyun, director of the international investment division at the Institute of World Economics and Politics, which is part of the Chinese Academy of Social Sciences, said that since fundamentals in China remain unchanged, the situation now will continue to support sound long-term economic development.

Feng Guan, deputy director of the OIG Institute, a research facility of Optima Integration Group, said he believes that as the positive impact of policy measures facilitating foreign trade growth becomes more visible, import and export activities will become more efficient. This will help actualize the potential of both foreign and domestic demand, resulting in better development of foreign trade in China.