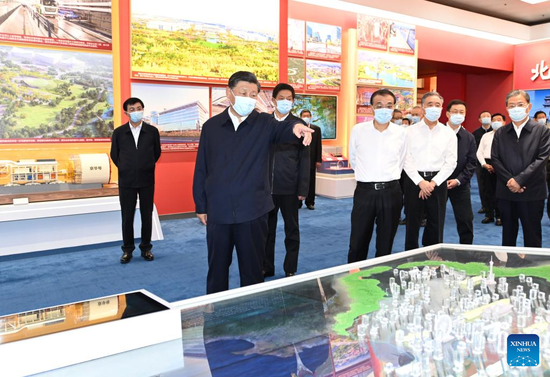 Chinese President Xi Jinping on Tuesday stressed concerted efforts to forge ahead determinedly toward a new victory of socialism with Chinese characteristics.

Xi, also general secretary of the Communist Party of China (CPC) Central Committee and chairman of the Central Military Commission, made the remarks when visiting an exhibition on the great achievements of the Party and the country over the past decade.

Xi stressed that since the 18th CPC National Congress in 2012, the CPC Central Committee has united and led the whole Party, the country, and the people in solving many challenging problems that were long on the agenda but never resolved, making many achievements that concerned the nation's future, and overcoming many political, economic, ideological, and natural risks, challenges, and trials.

Historic achievements and shifts have taken place in the cause of the Party and the country, equipping the country with better institutions, firmer material foundations, and a more proactive mindset for realizing national rejuvenation, Xi added.

He called for more efforts in raising public awareness of strategic measures, transformative practices, breakthroughs, and landmark accomplishments over the past decade. He also urged a better understanding of the significance of the profound changes during this period in the history of the CPC, of New China, of the reform and opening-up, of the development of socialism, and of the development of the Chinese nation, so that the whole Party, the country, and the people will maintain historical confidence and enhance the historical initiative.

Xi and other leaders arrived at the Beijing Exhibition Hall at 3:45 p.m. for the exhibition.

Under the theme of "Forging Ahead in the New Era," the exhibition focuses on the many accomplishments and shifts in the cause of the Party and the country over the past 10 years in the new era.

It spans six exhibit areas and covers more than 30,000 square meters in total. It features more than 6,000 exhibits, including pictures, material objects, and models.

Among them are objects and models showcasing China's significant improvements in science and technology and manufacturing, the state-level key publication project "Revitalization Library," and exhibits presenting China's campaigns of eradicating extreme poverty and fighting COVID-19.