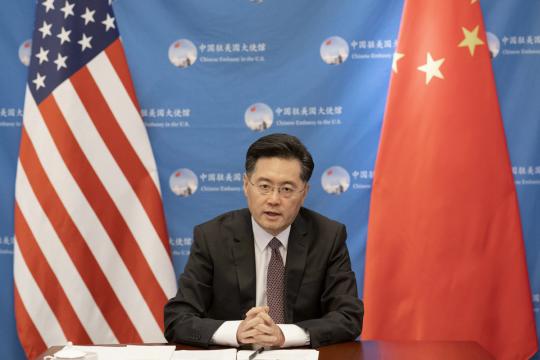 China remains committed to international cooperation on climate change and honors the promises it has made, a top Chinese envoy in Washington said on Tuesday, as he refuted a U.S. claim that the suspension of climate talks with it is "punishing the whole world".

Following a visit by U.S. House of Representatives Speaker Nancy Pelosi to Taiwan on Aug 2, China decided on Friday to halt climate change talks with the United States, an action that was among the eight countermeasures announced by China in response to the provocative move that has infringed on its core interests.

On Monday, U.S. Secretary of State Antony Blinken said of the ceasing of climate talks: "That's not punishing the United States; that's punishing the entire, the entire world and especially the developing world."

But on Tuesday night, Ambassador Qin Gang said via video at the 4th U.S.-China Business Forum in New York that "the U.S. cannot represent the whole world".

He said China-U.S. cooperation in various areas cannot do without the general atmosphere of the bilateral relations.

"We will stay committed to meet our goals of carbon peaking and carbon neutrality, take an active part in international cooperation on climate change, provide support and help for other developing countries as best as we can, and make our due contribution to global response to climate change," Qin said at the event, which was held by Forbes China.

China has vowed to peak greenhouse gas emissions before 2030 and achieve carbon neutrality by 2060.

"China always takes the promises it makes very seriously, and does everything possible to honor them," he said. "It is hoped that the U.S. should earnestly fulfill its historical responsibility and obligation on climate change."

The ambassador noted that the U.S. has used the lie of "forced labor" in Xinjiang in Northwest China to sanction and suppress Chinese photovoltaic enterprises in the solar energy field, in a move that has caused direct damage to China-U.S. climate cooperation and forced many Chinese workers, including Uygurs, to become jobless.

In June, despite the strong opposition from China, the U.S. insisted on implementing the "Uyghur Forced Labor Prevention Act", a piece of legislation that China's Foreign Ministry called an attempt to create "forced unemployment" and a "forced return to poverty" in Xinjiang.

Craig Allen, president of the U.S.-China Business Council, said that he is "not a big fan" of the act for many reasons.

"The most important one is that I think it'll just hurt a lot of Uygurs who are going to find it yet more difficult to find jobs. That's exactly the opposite of what we would like to happen," Allen told the New York forum.

In his speech, Qin reiterated that the Taiwan question is the most important and most sensitive issue at the very heart of China-U.S. relations. If not well handled, it will bring a "serious and even disruptive impact on our cooperation".

He said Pelosi's visit last week openly broke America's commitment not to develop official relations with Taiwan, and is a serious violation of the one-China principle and the provisions of the three Sino-U.S. joint communiques.

"Americans believe in the spirit of contract. You are from the business community, and you know that businesspeople take the commitments they make very seriously," Qin said.

The ambassador also noted that the most pressing challenge to China-U.S. economic and trade cooperation is whether the bilateral relations can maintain stability, given that the China-U.S. relationship is at a crossroads.

"Using strategic competition to define our ties, taking China as the primary competitor and most serious long-term challenge — such misperception and misjudgment will only raise the tension and lead our relations to the track of confrontation and conflict, and put even more pressure on our economic and trade cooperation," he said.

Sean Stein, chairman of the U.S. Chamber of Commerce in Shanghai, said U.S. businesses are looking at China to be the growth story over the next decade, and thus to continue investing in China, even though profitability has been dented following COVID-19 outbreaks.