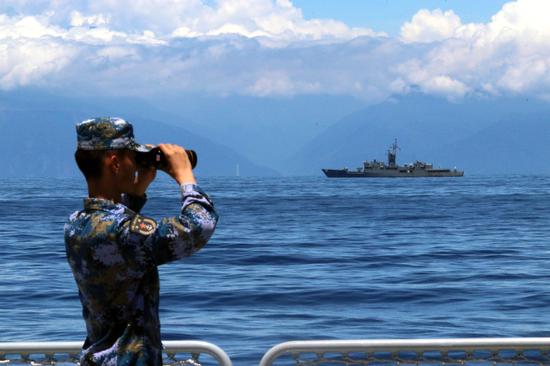 A soldier looks through binoculars during combat exercises and training of the navy of the Eastern Theater Command of the Chinese People's Liberation Army in the waters around the Taiwan island, Aug 5, 2022. (Photo/Xinhua)

The Eastern Theater Command of the Chinese People's Liberation Army (PLA) continued its joint combat training exercises as scheduled on Sunday in the waters and airspace around the Taiwan Island.

The focus on Sunday was set on testing the capabilities of using joint fires to strike land targets and striking long-range air targets.

Multiple bomber formations flew across the Taiwan Strait from north to south and from south to north, while several fighter jets conducted joint drills with destroyers and frigates.

The operation has tested the tactics of systems warfare under information-based conditions, and honed and improved the capabilities to destroy crucial island targets with precision strikes, said Zhang Zhi, an air force officer of the PLA Eastern Theater Command.