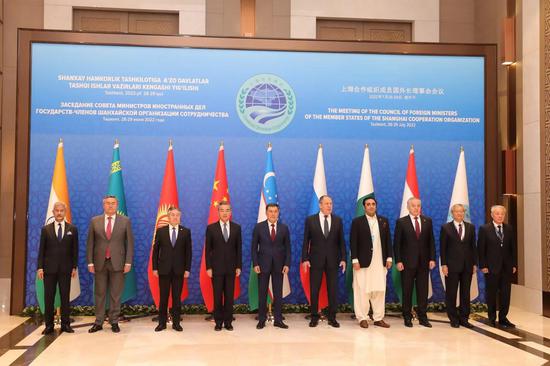 Chinese State Councilor and Foreign Minister Wang Yi on Tuesday had an interview with media after concluding his visit to Uzbekistan, Kyrgyzstan and Tajikistan.

During his visit, Wang attended the meeting of the Council of Foreign Ministers of the Shanghai Cooperation Organization (SCO) held in Tashkent, Uzbekistan, during which he reached broad consensus with foreign ministers of SCO member states and achieved the expected goals.

During the meeting, Wang said he had in-depth exchanges with his counterparts regarding how to enhance the organizational building of the SCO under new circumstances, better cope with major international and regional challenges, and reached broad consensus on fostering unity, seeking cooperation, boosting development and maintaining stability.

The foreign ministers agreed to make the best efforts to prepare for the summit scheduled for September, to strengthen unity and mutual trust, to firmly build safety protection, to strengthen development and cooperation, to push forward organizational building, and to safeguard fairness and justice in the international community.

This year marks the 30th anniversary of the establishment of China-Uzbekistan diplomatic ties.

During Wang's visit to Uzbekistan, both sides agreed to take the consensus reached by the two heads of state as a guide to deepen political mutual trust, strengthen the alignment of development strategies, and make joint efforts towards the vision and goal of building a China-Uzbekistan community with a shared future so that bilateral relations could build on past achievements and strive for new progress.

Both sides stressed that they will continue to deepen cooperation in connectivity, poverty alleviation, as well as healthcare.

Wang said during his visit to Kyrgyzstan, he had full communication with Kyrgyz President Sadyr Zhaparov and Kyrgyz Foreign Minister Jeenbek Kulubaev and reached broad agreement on deepening mutually beneficial cooperation between the two countries.

The two sides look forward to the implementation of the Global Development Initiative and the Global Security Initiative proposed by Chinese President Xi Jinping and agreed to continue high-quality Belt and Road cooperation.

Since the establishment of China-Tajikistan diplomatic ties 30 years ago, bilateral relations have withstood the test of international and regional situation, achieved leapfrog development and reached a high level of comprehensive strategic partnership, said Wang.

The two sides agreed to speed up the implementation of the important consensus reached between Xi and Tajik President Emomali Rahmon, and plan the long-term development of China-Tajikistan relations in accordance with the strategic guidance of the two heads of state.

The two sides are ready to cooperate in implementing the Global Development Initiative and the Global Security Initiative proposed by Xi. They will also continue to support each other on issues concerning each other's core interests and continue to advance the Belt and Road cooperation.

The two sides attach great importance to and are willing to deepen security cooperation.

As for the Afghan issue, Wang said all participating parties recognize that a peaceful, stable, inclusive and developing Afghanistan is in their common interest, adding that the final settlement of the Afghan issue should respect Afghanistan's independence and sovereignty and implement the principle of "Afghan-led and Afghan-owned."

As a friendly neighbor of Afghanistan, China is ready to strengthen communication and coordination with all parties and continue to play a constructive role in Afghanistan's reconstruction and development, Wang said.