China calls for rejection of double standards in nuclear non-proliferation 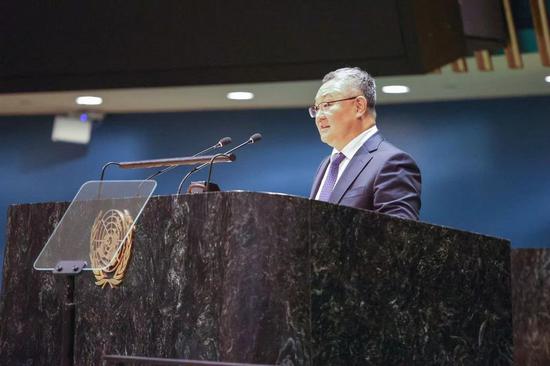 Photo posted on Aug. 2, 2022 shows Fu Cong, director-general of the Department of Arms Control of the Chinese Foreign Ministry, speaking at the 10th Review Conference of the Parties to the Treaty on the Non-Proliferation of Nuclear Weapons at the UN headquarters in New York. (Photo credit: Twitter account of Fu Cong)

The international community should reject double standards in the area of nuclear non-proliferation, a Chinese official told the 10th Review Conference of the Parties to the Treaty on the Non-Proliferation of Nuclear Weapons (NPT) on Tuesday.

The nuclear-powered submarine cooperation between the United States, the United Kingdom and Australia poses severe nuclear proliferation risks, in contravention of the purposes and principles of the NPT, said Fu Cong, head of the Chinese delegation.

This review conference should conduct in-depth discussions on its implications in all aspects, including its challenges to the safeguards system of the International Atomic Energy Agency, in order to firmly uphold the international non-proliferation regime, he said.

On the Iran nuclear deal, he said all parties concerned should stay committed to bringing the deal back on track at an early date through diplomatic negotiations, and reject the practices of pressuring with sanctions and threat of force. The United States should completely lift its relevant illegal sanctions on Iran and long-arm jurisdiction measures on third parties. On that basis, Iran should return to full compliance with its nuclear commitments.

The security situation on the Korean Peninsula remains complex and severe. There is a need to follow the dual-track approach and the principle of phased and synchronized actions in advancing the process toward the establishment of a peace mechanism and the denuclearization of the Korean Peninsula, said Fu, who is the director-general of the Department of Arms Control of the Chinese Foreign Ministry.

"The so-called nuclear sharing arrangements run counter to the provisions of the NPT and increase the risks of nuclear proliferation and nuclear conflicts," he said. "The United States should withdraw all its nuclear weapons from Europe and refrain from deploying nuclear weapons in any other region."

The relevant non-nuclear-weapon states should earnestly fulfill their NPT obligations and their own commitments, and stop instigating nuclear sharing or other forms of nuclear deterrence arrangements. Any attempt to replicate NATO's nuclear sharing model in the Asia-Pacific region would undermine regional strategic stability and would be firmly opposed by the countries in the region and, when necessary, face severe countermeasures, he said.