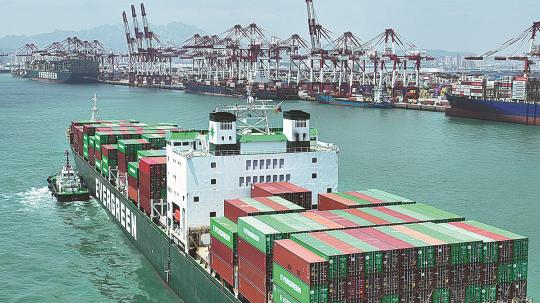 A container ship sails into the Qingdao Port on June 2, 2022. (Photo/Xinhua)

China's foreign trade will likely record double-digit growth in the second half of the year, thanks to the nation's strong economic resilience and faster recovery pace, according to a former vice-minister of commerce.

The annual growth rates of imports are also likely to become double-digit from August or September while that of the exports have already returned to double-digit level since May, Wei Jianguo, who is also vice-president of the China Center for International Economic Exchanges, told China Daily in an exclusive interview.

"Trade potentials from the Regional Comprehensive Economic Partnership are gradually unleashed, and the 19 free trade agreements China has signed with 26 economies will continue to facilitate trade and investment," he said.

"Although the overall global demand will likely decline as the pandemic continues and other major economies are stalling, overseas demand for Chinese products will continue to expand, especially in the United States, the European Union, South Korea and Japan," he said, adding Chinese economy is projected to make more contributions to world economic growth within the next five years.

China has complete and stable industrial and supply chains, and the fundamentals of the Chinese economy remain unchanged with a bright long-term outlook. That, together with global energy crunch and shutdown of factories in many European countries, have pushed up popularity of Chinese goods, according to Wei.