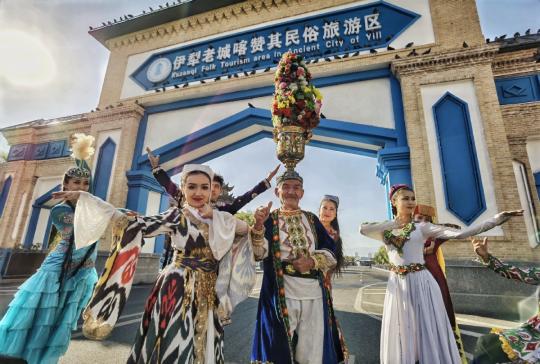 People in the Xinjiang Uygur autonomous region have recently been sending emails to the United Nations High Commissioner for Human Rights Michelle Bachelet, sharing their personal stories and expressing their anger at learning about how the region is being portrayed by anti-China forces.

Many witnesses and families of the victims of terrorism hope that Bachelet can learn more about the impact of the brutal attacks by reading their emails, Xinhua News Agency reported on Thursday.

Memetjan Mettohut, a resident of Urumqi, said he cannot forget how people were chased and beaten by violent mobs during the riot on July 5,2009, in the regional capital.

In his email, Memet Juma, imam of the Id Kah Mosque in the city of Kashgar, said his father, who was the imam of the mosque at the time, was viciously killed by terrorists on July 30, 2014. The attack left a hole on his father's skull and a deep cut on his neck, said Memet, adding that he still can't understand how anyone could attack an elderly man in his 70s so harshly.

From 1990 to 2016, separatists, extremists and terrorists plotted and carried out thousands of terror attacks in Xinjiang. They killed many innocent civilians and several hundred police officers, according to the regional government.

Determined to protect people's lives, the government has undertaken a series of measures to fight and prevent terrorism since 2014, including setting up vocational education and training centers to help those who may be influenced by terrorism and extremism. All trainees have since graduated.

One of the former trainees, Nur Namehat, said in her email to Bachelet that no female trainee had been sexually assaulted while she was at a center in Shufu county, Kashgar prefecture. Such claims are totally made up by Western media, she added.

Abdula Umur, who graduated from a training center in the city of Turpan, said with the computer skills he obtained at the center he set up an e-commerce company selling dried fruit after graduation. The centers were just schools offering useful courses, not so-called internment camps portrayed by anti-China forces, he wrote in the email.

Bachelet visited China from May 23 to 28. During her trip to Xinjiang, she visited Urumqi and Kashgar and talked to the locals.