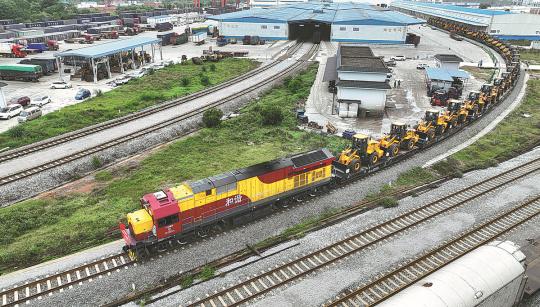 The new international land-sea trade corridor and tightened cooperation in the areas of green, digital and marine economies among China and member economies of the Association of Southeast Asian Nations will further unleash the potential of the Regional Comprehensive Economic Partnership agreement, said senior government officials.

Launched in 2019, the corridor to date connects 14 provincial-level regions in China with over 310 ports in 107 countries and regions around the world. It especially boosts trade between China and ASEAN countries under the RCEP agreement, according to the National Development and Reform Commission.

Benefiting from this route, goods can be transported via various modes including railways, highways and water routes to the Beibu Gulf in the Guangxi Zhuang autonomous region before being shipped to other parts of the world along the sea routes. The corridor offers a faster alternative for western Chinese provinces and autonomous regions other than transporting goods via the east coast.

Minister of Transport Li Xiaopeng said China will strengthen the construction of land-sea intermodal transport hubs and land-based cross-border channels with all parties in the Pan-Beibu Gulf region, and support Guangxi to build the Pinglu Canal, which will be built later this year.

Stretching 140 kilometers and requiring an estimated investment of 68 billion yuan ($10.7 billion), the canal will link the Xijiang River, a major waterway in southwestern China, with ports in the Beibu Gulf.

Once the project is completed, Guangxi will have a new sea access point. Vessels on the middle and upper reaches of the Xijiang River can sail out to sea from the Beibu Gulf via the canal, a distance 560 km shorter than from Guangzhou Port in Guangdong province.

"We are willing to cooperate with all sides in the Pan-Beibu Gulf region to carry out comprehensive port development, improve the service capabilities of waterways, optimize port functions and support the growth of multimodal transport," Li said during the 12th Pan-Beibu Gulf Economic Cooperation Forum, held in Nanning, Guangxi's regional capital, late last week.

A total of 379,000 twenty-foot equivalent units (TEUs) of cargo have been sent by the land-sea freight trains of the new international land-sea trade corridor in the first half, up 33.4 percent year-on-year, according to China Railway Nanning Bureau Group Co Ltd, a regional branch of China State Railway Group Co Ltd, the nation's railway operator.

"Pan-Beibu Gulf cooperation has grown into a significant sub-regional cooperation under the framework of the China-ASEAN cooperation," said Jurin Laksanawisit, Thailand's deputy prime minister and commerce minister, at the forum.

He added that the Pan-Beibu Gulf cooperation has enhanced China-Thailand trade ties, and with the implementation of the RCEP agreement, it is more conducive to strengthening the economic and trade cooperation between the ASEAN and its trading partners.

"With the concerted efforts of China and the ASEAN, their economic cooperation has been expanded from goods trade and two-way investment to the fields including marine, digital and green economies," said Long Guoqiang, vice-president of the Development Research Center of the State Council.

As the RCEP agreement came into force on the first day of this year, officials and business leaders said that the pact has provided greater convenience for trade between China and ASEAN, and the new international land-sea trade corridor is a key platform for the growth of this free-trade agreement.

Noting China's achievements in port construction, Malaysian Transport Minister Wee Ka Siong said Malaysia will continue to deepen cooperation with China and countries in the Pan-Beibu Gulf area in the coming years and seize more opportunities brought by the RCEP.