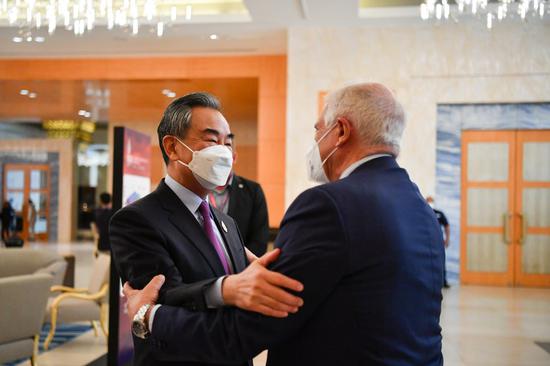 Chinese State Councilor and Foreign Minister Wang Yi said Thursday that China and the European Union (EU) are two major forces in the multi-polar world, and they should uphold the basic orientation of their comprehensive strategic partnership.

During a meeting with EU High Representative for Foreign Affairs and Security Policy Josep Borrell on the sidelines of the Group of 20 (G20) foreign ministers' meeting held in Bali, Indonesia, Wang said the two sides should maintain the positive momentum of dialogue and communication, and seek common grounds while shelving differences when they are faced with complicated challenges.

Wang said China and the EU should adhere to the mutually beneficial and win-win cooperation, uphold true multilateralism and oppose any acts that trumpet decoupling and violate the law of the economy.

Both sides should reject zero-sum games, instigation of bloc confrontation and attempts to stoke a new Cold War, Wang noted.

He stressed that China is willing to work with the EU side to uphold the international system underpinned by the United Nations and basic norms governing international relations anchored upon international law.

For his part, Borrell said the EU believes that the two sides share more common interests than differences, and it is willing to pursue the one-China policy and conduct more strategic coordination and cooperation with China.

The EU is deeply concerned about the adverse impacts of the Russia-Ukraine conflict, and hopes China will play an important role in achieving peace.

On the Ukraine crisis, Wang said parties concerned should seriously reflect on the root causes of the conflict, address the legitimate concerns of every party, and fundamentally eliminate the potential dangers of war.

China's proposals have clearly expounded its positions on the Ukraine crisis, which would serve as a key guide for securing a lasting peace and security, Wang said.

In April this year, China made four proposals on the Ukraine situation, calling for promoting peace talks, preventing a humanitarian crisis on a bigger scale, fostering lasting peace in Europe and the Eurasian continent, and preventing the regional conflict from magnifying.

All the efforts China has made aimed to promote peace and facilitate talks, Wang said, adding that China will adhere to its objective and impartial position and continue to play a constructive role.

China supports the EU side in sticking to its strategic autonomy and playing a more active role of coordination to work out viable plans, Wang said.