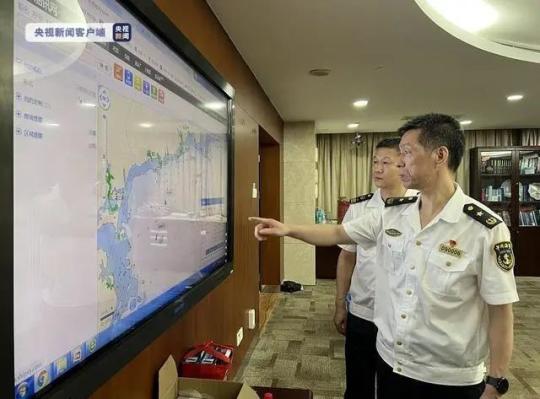 A deck worker from the sunken engineering ship Fujing 001 was rescued by a military vessel on Monday morning, while 12 bodies suspected of being some of the missing crew members were also found.

The rescued worker was in stable physical condition. The bodies were spotted on Monday afternoon 50 nautical miles southwest of where the ship sank, according to the Guangdong provincial maritime search and rescue center.

Efforts are continuing to find the 14 people who remain missing.

The vessel, which had worked at an offshore wind power farm project, was moored off the coast of Yangjiang, Guangdong, ahead of Typhoon Chaba's arrival and was sunk by the storm on Saturday morning. Three people were rescued on Saturday.

The ship belonged to Shanghai Huajing Zhiyun Marine Technology Co. According to information posted on the company's website on June 7, the staff on the vessel were building part of the Qingzhou I and Qingzhou II offshore wind power farm projects in waters off Yangjiang. The projects are invested in by a subsidiary of Guangdong Energy Group Co.

Chaba continued to weaken in the Guangxi Zhuang autonomous region on Monday after making landfall in western Guangdong on Saturday. However, its impact is forecast to extend further inland in the coming three days and bring rain to multiple provinces in central and eastern China, with heavy rains expected in some places.

Heavy downpours were forecast in parts of Hunan on Monday and Tuesday. Between 7 am on Sunday and 7 pm on Monday, 291 monitoring stations in the province recorded more than 50 millimeters of rainfall, with the largest volume, 245.6 mm, reported in Daoxian county, according to the provincial meteorological service.

A small tornado hit Huangpu district in Guangzhou, Guangdong on Monday morning, breaking tree branches and damaging roofs in an area of about 5,000 square meters.

Chaba is also forecast to cause significant rain in northern and northeastern China, according to the National Meteorological Center.

The State Flood Control and Drought Relief Headquarters dispatched a work team to Liaoning province in northeastern China on Sunday to guide local work guarding against potential flooding, after two teams were sent earlier to Guangdong and Guangxi.

The Ministry of Water Resources sent a team to Hunan on Sunday, with teams already working in Guangdong, Guangxi and Hainan.