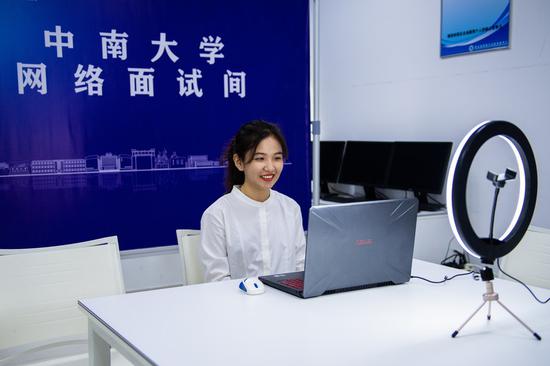 In a year where a record 10.76 million graduates stream out of colleges, China is living out its jobs-first commitment to helping them enter the workforce against COVID-19-induced snarls.

This job-hunting season may prove challenging for college graduates due to COVID-19-hampered job interviews and lukewarm demand for fresh labor, said Wu Aihua, an official with the Ministry of Education.

China's surveyed urban unemployment rate stood at 5.9 percent in May, official data showed. The rate among those aged between 16 and 24 was 18.4 percent.

College graduates are deemed a key target of China's employment-first policy. China has launched a series of pro-employment campaigns to move job interviews online, incentivize firms to increase their employees and open the doors of big cities wider to college graduates.

On May 16, the Ministry of Human Resources and Social Security initiated a nationwide online recruiting platform that will last till Aug. 25 to promote over 10 million openings, give occupational training lessons and offer employment counseling.

By June 5, around 340,000 employers have posted 9.77 million openings on the platform, which also facilitated many on-the-ground events across China. North China's city of Gaobeidian, for instance, invited seven companies to livestream to graduates of Hebei University with 50,000-strong views.

With presidents and Party chiefs of universities as the faces of recruitment events, by last Friday, a total of 2,255 universities had made contact with around 77,000 employers, adding 1.41 million jobs and 566,000 internship posts, official data showed.

For job-seekers fresh out of college, these platforms and on-the-ground events allow them to browse for hiring information the way they "shop at supermarkets," said a graduate.

"With the help of various employment platforms, the demands of employers and college graduates are effectively aligned," said Zou Yongping, a human resources specialist at a Jiangxi-based agricultural firm. The company plans to hire 1,500 people this year and is knee-deep in arranging interviews.

On the hiring front, companies nationwide are encouraged to expand their staff. Central China's Jiangxi Province, for example, subsidizes employers 1,500 yuan (about 223.5 U.S. dollars) for each new employee they signed on. In northwest China's Xinjiang Uygur Autonomous Region, 222,800 employees had brought employment subsidies of 509 million yuan to their employers by the end of May.

Local governments are also chipping in for business ventures of college graduates, with Jiangxi handing out a sum between 5,000 yuan to 10,000 yuan to each young entrepreneur running registered individually-owned businesses for longer than six months.

Chinese cities like Shanghai and Shenzhen moved fast to attract talents, especially fresh graduates from domestic and foreign universities, to settle in. Their measures include the elimination of residential registration requirements, rental waivers and even subsidies for starting businesses and home purchases.

The country's moves to stabilize employment for college graduates will both help many of them find work in this job-hunting season and equip them with stronger professional skills to excel in the longer term, said Yao Kai, director of a research center under the Fudan University.

China aims to create over 11 million new urban jobs and keep a surveyed urban unemployment rate of no more than 5.5 percent in 2022, according to a government work report.