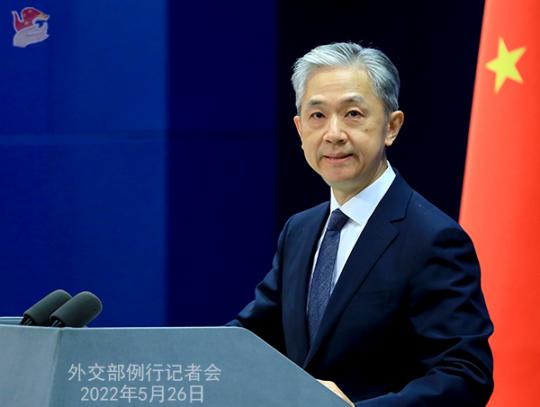 Foreign Ministry spokesman Wang Wenbin urged the head of the North Atlantic Treaty Organization on Thursday to stop smearing China and give up drawing lines according to ideological differences.

"NATO has messed up Europe and it should not attempt to disrupt Asia and the world at large," Wang warned at a daily news briefing.

Jens Stoltenberg, secretary-general of the military alliance, criticized China's political system and claimed that it and Russia posed threats to NATO's security.

China firmly opposes and strongly condemns Stoltenberg for his wanton remarks on the country's political system and its domestic and foreign policies, and for promoting the "China threat theory", the spokesman said.

Wang criticized NATO for calling on its member states to increase their military spending to a minimum of 2 percent of their GDP, while making irresponsible remarks about China's normal defense and military modernization. "It is typical double standards," Wang said.

Noting that China pursues peaceful development and a defensive national defense policy with nuclear capabilities kept at the minimum level required to safeguard national security, Wang said the proportion of China's defense expenditure to its GDP had remained at around 1.3 percent for a long time, far below the global average.

Unlike certain NATO countries that threaten other countries with force, Wang said China neither engages in military alliances, nor does it export its ideology, meddle in others' internal affairs, voluntarily launch trade wars or groundlessly suppress other countries' businesses. "How can China pose threats to NATO's security?" Wang asked.

He stressed that the international community should "stay on high alert and resolutely reject" NATO's actions to continuously expand and advocate a "new Cold War" featuring bloc confrontation.

NATO has publicly stated multiple times that its position as a regional alliance remains unchanged and it does not seek to expand its membership to other regions, according to Wang.

However, Wang said that in recent years, NATO has continued to enter the Asia-Pacific region, with some of its member states sending flights and warships to the waters surrounding China to conduct military exercises, which has created tensions and provoked conflicts.