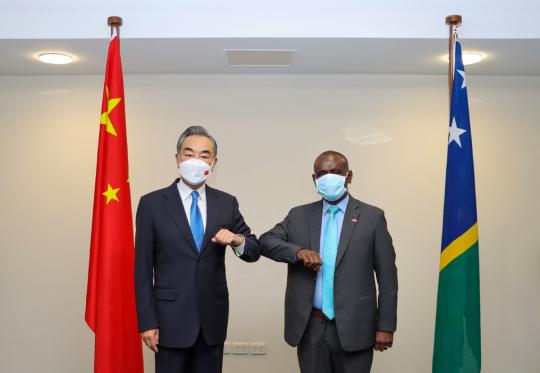 Security cooperation between China and the Solomon Islands does not target any third party and China has no intention of building a military base there, State Councilor and Foreign Minister Wang Yi said on Thursday.

He made the remarks in Honiara, capital of the Pacific Island country, in a news briefing with Solomon Islands' Minister of Foreign Affairs and External Trade Jeremiah Manele following their bilateral talks.

When asked about the framework agreement on security cooperation signed between the two countries last month, Wang said it is a cooperation deal by two sovereign countries that aims to assist the Solomon Islands in boosting its law enforcement capabilities.

It will help the country maintain public order while protecting the safety of Chinese citizens and organizations there, Wang said, describing the cooperation as "reasonable, legitimate and lawful".

Severe unrest broke out in the Solomon Islands in November, putting the lives and property of the people at great risk. China provided multiple shipments of police equipment and sent an ad-hoc police advisory team to the country to conduct training and help its police strengthen capacity-building, which was widely praised by the Solomon Islands government and all sectors of society.

Wang refuted smears against normal China-Solomon Islands security cooperation, saying that any attempt to disrupt such cooperation will not succeed.

The Pacific Island nations are sovereign and independent countries and are not the "backyard" of anyone, Wang said, noting that all of these countries have the right to make their own choices instead of being vassals of other nations.

He said that China never coerced the cooperation agreement and never interfered in the Solomon Islands' domestic affairs or undermined the interests of other countries.

Such practice does not conform with China's foreign policy and is not the way that Chinese people deal with things, Wang said, adding that security cooperation between the two countries does not contradict but rather can complement other regional arrangements.

The Solomon Islands is the first leg of Wang's 10-day tour of the Pacific, which will also bring him to Kiribati, Samoa, Fiji, Tonga, Vanuatu, Papua New Guinea and Timor-Leste.

Chen Xiaochen, executive deputy director of the Centre for Asia Pacific Studies at East China Normal University in Shanghai, said that Wang's visit to Honiara shows China's firm support to the Solomon Islands, which had the lowest GDP per capita among Pacific Island countries before it established diplomatic ties with China.

"The China-Solomon Islands cooperation is indicative in that China would help countries with urgent development needs," he said.

Chen said the root reason that some people in the West view China-Solomon Islands cooperation through a geopolitical lens is because of their outdated "sphere of influence" thinking, which should be rejected.