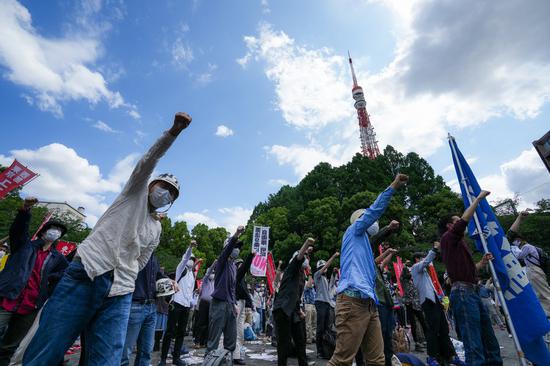 Protesters gather at Shiba Park to demonstrate against the upcoming U.S.-Japan summit and the summit of the Quadrilateral Security Dialogue (Quad), in Tokyo, Japan, May 22, 2022. (Photo: Xinhua/Zhang Xiaoyu)

On his first trip to Asia since taking office in January last year, U.S. President Joe Biden visited South Korea and Japan amid public protests in the two Asian countries.

In Japan, Biden attended the summit of the Quadrilateral Security Dialogue (Quad) to hustle the so-called Indo-Pacific Economic Framework (IPEF).

"The U.S. 'Indo-Pacific Strategy (IPS)' is causing more and more vigilance and concern in the international community, especially in the Asia-Pacific region," Chinese State Councilor and Foreign Minister Wang Yi said, criticizing the United States for creating the IPS to form small cliques in the name of freedom and openness, noting its purpose is to contain China.

Experts have also said Biden's IPEF has aroused many doubts in South Korea and Japan, and the U.S. attempt to form closed and exclusive cliques is doomed to fail.

Biden on Monday launched the so-called IPEF, which groups a number of countries including Japan, with the new framework purporting to help member countries in myriad ways including strengthening supply chains and digitalization, although the launch was met by public denunciation.

The IPEF in effect is an extension of the IPS in the economic domain intended to exclude China.

Japanese media said they are not optimistic about its scale and prospect since it is very confrontational with China and cannot bring visible economic benefits to participating members since it has no specific contents or operating methods such as tariff reduction.

Instead of pursuing protectionism, the IPEF should advocate free trade, Wang said, adding that by withdrawing from the Trans-Pacific Partnership, the United States has gone to the opposite of free trade.

Wang stressed that the United States should follow free-trade rules rather than start something new and undermine the existing regional cooperation architecture.

According to a report from Japan External Trade Organization, Biden's ability to allocate enough political capital to this economic framework will be sorely tested ahead of mid-term congressional elections in November since there has been widespread public anger over supply chain disarray, labor shortages and rising inflation.

The IPEF, with no substantive contents such as market opening and tariff reduction, is not attractive, said Toshiki Takahashi, research executive at the Institute for International Trade and Investment.

Tomoo Marukawa, a professor at the Institute of Social Science of the University of Tokyo, said that if the IPEF is intended to restrict trade with China, it will not bring any economic benefits to its members, but only restrict trade, and will have limited impact on the regional economy.

In a joint statement issued after the U.S.-Japan summit on Monday, the leaders of the two countries claimed that maintaining and developing a free and open international order is the common strategy of bilateral alliance.

Both countries confirmed to further strengthen the deterrence and response power of the alliance and agreed to expand and deepen defense cooperation. The United States has pledged to upgrade Japan's defense to "extended deterrence" under its nuclear umbrella and support Japan's significant increase in defense spending.

Biden also attended the meeting with the Quad on Tuesday, which involves the United States, Japan, India, and Australia, as part of its IPS to push back China.

It will be proven that the IPS, in essence, is a strategy to create division, incite confrontations and undermine peace. No matter how it is packaged or disguised, it will inevitably fail in the end, Wang said.

While the United States claims to promote "freedom and openness," experts believe in reality it is building a closed and exclusive "clique" through the "trilateral security partnership" and the "quadrilateral mechanism."

Michael Jonathan Green, senior vice president for Asia and Japan Chair at the Center for Strategic and International Studies, said that the IPEF will not convince the region, and the role of the quadrilateral mechanism in safeguarding the security of the Indo-Pacific region will be limited.

South Korea's JoongAng Daily also commented that Washington intends to suppress China economically through the IPEF while simultaneously seeking to counter China militarily through the geopolitical bloc of Quad on its "dual-track" approach against China.

Takakage Fujita, director general of a civil group dedicated to upholding and developing the well-known Murayama Statement, told Xinhua that Biden created the IPEF to use Japan and ASEAN countries to contain China economically for its own benefit.

Fujita said Washington should follow a coordinated and friendly approach and come up with decent economic ideas instead of trying to contain China if it wants to truly pursue peace and development in Asia.

Woo Sukeun, head of the Institute of East Asian Studies of Korea, told Xinhua that Biden's visit to East Asia is obviously intended to win over allies such as South Korea and Japan to confront China.

According to Woo, issues discussed during Biden's visit will increase geopolitical instability in the region, which will harm the region's long-term and common interests.

"I think it (Biden's visit) is a typical visit with American intentions," Wood said. "The Indo-Pacific Economic Framework is also a framework that intensifies regional rivalries and tensions. The United States says this framework is inclusive and flexible. But why is it inclusive while specific countries are excluded? China is the largest country in the Indo-Pacific region. Why does this framework exclude China? If China is excluded, can we still call it inclusive and flexible?"

Biden's visit was greeted by fierce protests in South Korea and Japan. Protesters took to the streets of Tokyo for three days, holding banners saying "CRUSH! Japan-U.S. & Quad Summit for War" in Japanese and English.

A number of Japanese lawyers, local lawmakers and writers delivered speeches at rallies, criticizing the Japan-U.S. summit for further strengthening military integration with Washington and accelerating the pace of Japan's military expansion.

The organizer of the rallies, Japanese lawyer Shunkichi Takayama, stressed that Biden's visit brought an inestimable adverse impact on regional peace and stability, and sowed the seeds of regional unrest.

Experts also said that openness, cooperation and mutual benefits are the common aspirations of people in the Asia-Pacific region, and the U.S. attempt to form "cliques" for its own selfish interests clearly runs counter to such aspirations.

As the IPEF excludes China, it contradicts the idea of a "free and open Indo-Pacific region" pursued by the Japanese government, because it is not "open," Marukawa said.

The Cold War mentality has long been outdated, but some individual country is still clinging to it and attempting to incite confrontation and conflicts, Woo said, referring to Washington's exclusion of specific countries in practice which exposes its hypocrisy.

Kim Yanghee, director-general of Department of International Economy, Trade and Development Studies, Korea National Diplomatic Academy, said that if the United States pursues the IPEF, it will undermine the Regional Comprehensive Economic Partnership initiated and led by ASEAN, and violate the Biden administration's commitment to valuing alliances and respecting ASEAN's centrality in regional affairs.

A recent report by the U.S. Center for Strategic and International Studies showed some Asian countries have already expressed concerns that the IPEF is "primarily a political endeavor meant to counter China, rather than a sincere and thoughtful economic policy integration initiative."