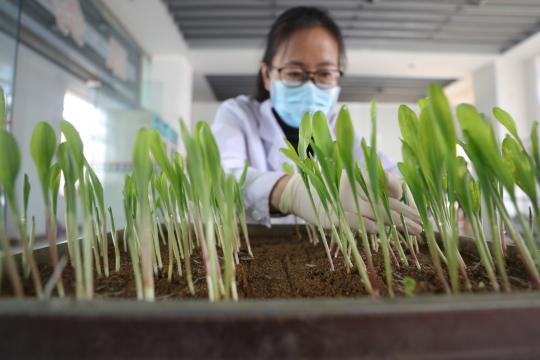 A researcher takes care of corn seedlings at a seed laboratory in Liaoning province, on March 16, 2020. (Photo/Xinhua)

President Xi Jinping has encouraged young scholars at Nanjing University who have returned to China from studying overseas to help the nation build up its self-reliance in science and technology and set an example in firming up cultural confidence.

In a letter on Wednesday replying to 120 young scholars at the university with overseas study experience, Xi expressed his hope that they would further align themselves with the goal of serving the nation and the people.

Xi, who is also general secretary of the Communist Party of China Central Committee and chairman of the Central Military Commission, offered his congratulations to faculties, students and alumni of the university, which celebrates its 120th anniversary on Friday.

He expressed his pleasure that the young scholars have followed the example of late Chinese scientists, including Li Siguang, a noted geologist, and Cheng Kaijia, a well-known theoretical physicist, in returning to the motherland after studying overseas and dedicating themselves to research and teaching.

Xi said he concurred with the scholars who said in their letter that it is one's blessing to be born into great times and that young people who return from studying overseas must remain dedicated to the major issues of the nation and take up responsibilities for the nation.

He urged the scholars to secure new outcomes in fostering virtue through education, better telling China's story and contributing their wisdom and strength to building China into a modern socialist country in all respects and realizing the Chinese Dream of national rejuvenation.

Nanjing University was developed from the Sanjiang Normal School, which was founded in 1902. The 120 scholars, representing those who have joined the university since 2012 after studying overseas, recently wrote to the president and shared their experience on teaching, research and innovation.

They also expressed their resolve to carry forward fine traditions and shoulder their mission of making China a stronger nation.