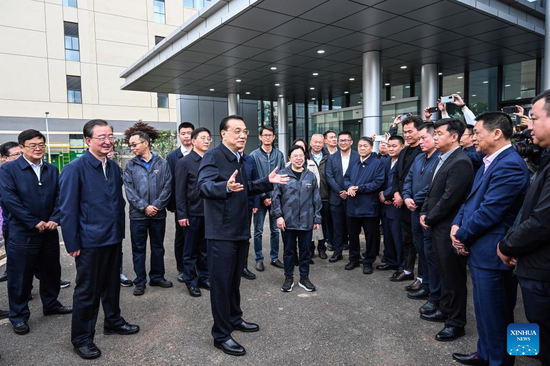 Chinese Premier Li Keqiang, also a member of the Standing Committee of the Political Bureau of the Communist Party of China Central Committee, visits a local communication company in Kunming, southwest China's Yunnan, May 18, 2022. Li made an inspection tour in Qujing and Kunming of southwest China's Yunnan Province from Tuesday to Thursday. (Xinhua/Rao Aimin)

Chinese Premier Li Keqiang has urged more efforts to coordinate COVID-19 control with economic and social development in an efficient way, and to strengthen support for market entities in difficulty.

Li, also a member of the Standing Committee of the Political Bureau of the Communist Party of China Central Committee, made the remarks during an inspection tour in Qujing and Kunming, southwest China's Yunnan Province, from Tuesday to Thursday.

While inspecting the growth of seedlings in a corn field, Li learned about the costs and earnings of grain production. After hearing from the farmers that the national subsidies for farming supplies have alleviated the pressure of costs, Li said another batch of subsidies will be issued soon to prop up farmers.

Noting that micro and small businesses and self-employed households are having difficulties in repaying their loans, Li called for efforts to thoroughly implement loan-extension policies and roll out the policy of phased deferment of loan-interest repayments as soon as possible.

At an agricultural product market, he called on the vegetable-rich province to give play to its advantages and contribute more to keeping prices across the country stable.

Li also heard a briefing on the employment and entrepreneurship situations of college graduates in Yunnan University, and urged more efforts to boost employment.

While visiting a local communication company, Li encouraged enterprises to reform, innovate, open up and develop themselves, in a bid to bring together advanced elements at home and abroad, while generating a multiplier effect.

The premier also inspected the coordinating center of the west-east power-transmission program. He stressed the important role of a stable supply of energy in ensuring development and stabilizing prices, and pledged resolute efforts to stamp out power rationing this year.