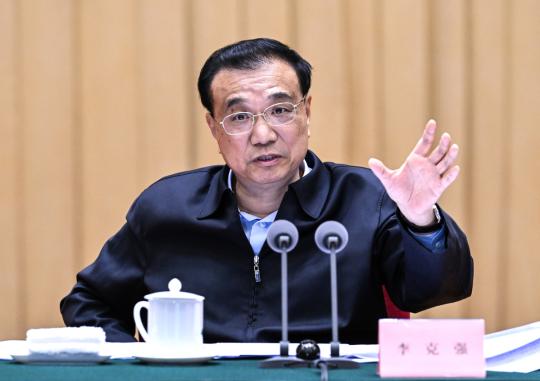 Premier Li Keqiang speaks in a meeting on stabilizing economic growth and the job market in Kunming, Yunnan province on May 18, 2022. (Photo/Xinhua)

Premier Li Keqiang pledged stronger support for the platform economy and the digital economy on Wednesday, including steps to help businesses get listed both in China and abroad, as part of broader steps to counter the downside pressure facing the economy.

Li made the remarks in a meeting he held on stabilizing economic growth and the job market in Yunnan province, in which he spoke with top officials from the province as well as governors from another 11 provinces via video link.

He called for forceful steps to bolster the confidence of private businesses, saying that more work must be done to stabilize the real estate market and housing prices and support the reasonable housing demand of residents.

The meeting follows China's economic growth slowing in April, with drops in both industrial production and consumption amid the impact of COVID-19 outbreaks on Shanghai and other manufacturing powerhouses, which severely disrupted industrial, supply and logistics chains.

Li said China's economy faces heightened downside pressure with the weakening of major indicators in April. However, he pointed to the nation's over 150 million market players, stable commodity prices and ample policy room to respond to the challenges as a source of confidence.

He called for stronger macro policy regulation and full implementation of the policies already rolled out, saying that local authorities and different departments must come up with more measures before the end of this month to return economic growth to a normal track.

The premier reiterated the need to stabilize market players in protecting payrolls and ensuring the people's well-being, adding that aid packages such as tax refunds and cuts must be put in place.

He said financial institutions would be encouraged to offer deferrals to smaller firms and self-employed individuals on their loan interest.

It is important to guarantee the steady supply of grain and energy and enable the unimpeded flow of logistics while taking sound steps to contain COVID-19 outbreaks, he said, adding that the core competitiveness of State-owned enterprises must be further enhanced.

The meeting marked the second time that the nation's top leadership has signaled stronger support for the platform economy, a sector including China's tech giants such as Tencent Holdings Ltd and Alibaba Group Holdings Ltd.

Vice-Premier Liu He said at a symposium organized by the National Committee of the Chinese People's Political Consultative Conference in Beijing on Tuesday that the nation is considering a set of detailed measures to support the healthy growth of the platform economy, and companies in the sector will be encouraged to take part in major innovation projects.