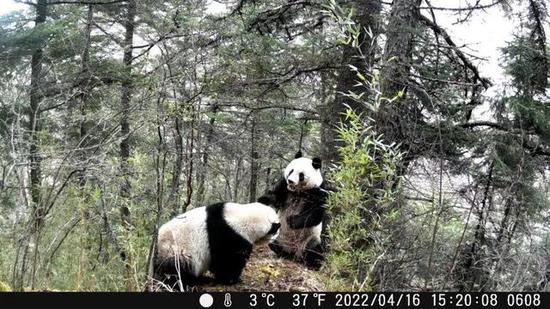 Infrared cameras have captured footage of wild giant pandas fighting for the right to mate in the Huanglong Nature Reserve of southwest China's Sichuan Province.

More than 300 photos and 30 video clips were taken to record the battle between three male pandas, with the winner earning the right to mate with a female, said An Dejun, director of the reserve's resources protection and scientific research department.

"The victorious male panda spent more than five hours with the female, who is expected to give birth at the end of this year," said An.

Wild giant pandas, which habitually live alone, search through flat areas to find a mate in the annual estrus season, when they usually gather together and fight for mating rights.

It was the first time such images of giant pandas vying for a mate had been captured in the Huanglong Nature Reserve.