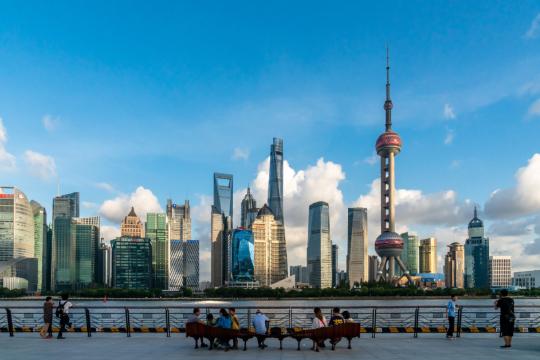 Lujiazui, the financial center in Shanghai, forms a perfect backdrop to the Bund area. （Photo by Wang Gang/For China Daily）

Shanghai is expected to achieve zero-COVID beyond areas under closed-loop management in mid-May, and will by then ease COVID-19 restrictions while implementing a tiered management system for communities based on their risk levels, local authorities said on Friday.

According to the city's vice-Mayor Wu Qing, efforts to control the current COVID-19 wave have started to show good results. Despite small fluctuations in daily new infection numbers, over 99 percent of new infections have been identified through testing in closed-loop management zones. In the past three days, only six cases were found in other areas.

"The city is now facing a critical transition from epidemic emergency response to a normalized prevention and control mode," Wu said.

Further efforts will be made in key zones for epidemic control and prevention including old neighborhoods and villages with risks of a resurgence, he added.

"We're drafting an outline to consolidate the results of the prevention and control efforts so far and prepare for the resumption of work, business and on-campus education and a return to normalcy," Wu said.

Cars will be allowed back on the roads gradually while supermarkets, convenience stores, and other types of businesses such as hairdressing will gradually be allowed to operate.

"Students who need to sit for exams, especially the 9th, 11th and 12th graders in high schools, will be given priority to return to school. More healthcare institutions and government service windows will also be reopened gradually," he added.