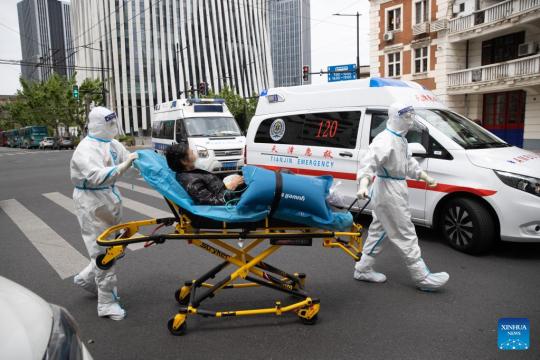 The latest model by Chinese and United States scientists shows that the Omicron variant would place a severe strain on China's healthcare system and cause around 1.55 million deaths if left to spread unabated, according to a preview study published by Nature Medicine on Tuesday.

The peer-reviewed study was conducted by researchers from Fudan University in Shanghai and the Indiana University School of Public Health. The model simulated a hypothetical Omicron wave in China based on data from the March 2022 Omicron outbreak in Shanghai to evaluate the burden an uncontrolled epidemic would have on the country's healthcare system.

The study found that the Omicron variant "could have the potential to generate a tsunami of COVID-19 cases", and would lead to a projected peak demand for intensive care that is 15.6 times existing capacity.

The worst-hit demographic would be people age 60 and above, who would make up over 90 percent of ICU admissions.

Unvaccinated seniors above 60 were projected to account for 74.7 percent of the deaths, or around 1.16 million fatalities.

The study also examined how the Omicron wave would affect different regions of the country.

For example, Shandong province would have a lower number of deaths per 1,000 people compared to Shanghai due to the province having a high vaccination coverage for seniors.

As of March 21, around 89.2 percent of people age 60 and above in Shandong had been fully vaccinated, and around 72.5 percent had received a booster shot, official data shows.

However, the lack of ICU beds is a major challenge as the Omicron variant would drive up demand for this critical medical resource. In regional analyses, Shanghai, Shandong and Shanxi provinces would see substantial shortages of ICU beds. The shortages would last around 44 days.

Scientists also pointed out several limitations to their model, one of which is assuming the mortality rate of the Omicron wave would remain constant over the projected period when other studies have suggested that this rate may increase during periods of high strain on hospital services. Therefore, the total number of deaths may be underestimated.

Given these projections, researchers suggest more non-pharmaceutical intervention measures, such as routine testing, social distancing and travel restrictions are required to sustain the dynamic clearance policy against the highly infectious and immune-evasive Omicron variant.

Meanwhile, it is imperative to expand vaccine coverage for the elderly and the access to effective antiviral therapies across the country, they added.

According to their estimates, only when around 97 percent of the senior population is vaccinated and 50 percent or more of symptomatic cases are treated with antiviral therapies can the peak occupancy of ICUs be lower than the nation's capacity, and the death toll of the Omicron epidemic may be comparable to that of seasonal influenza.

In the absence of these two conditions, the researchers said, the most optimal strategy to prevent the healthcare system from being overwhelmed appeared to be the reliance on strict controls.

In the long term, improving ventilation in buildings, strengthening critical care capacity, and the development of highly effective vaccines with long-term immune persistence would be key priorities, they added.