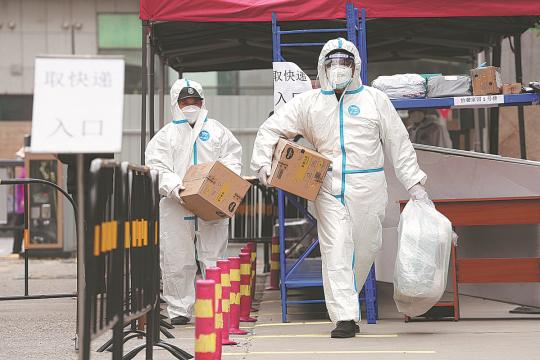 Beijing will strictly follow the dynamic zero-COVID policy in taking rapid and targeted action to contain the epidemic as the city's latest outbreak continues to trend upward, a senior official said on Tuesday.

The capital reported 59 new locally transmitted COVID-19 cases in the 24 hours starting Monday afternoon, bringing the total number of infections to 836 since April 22. Fifteen districts are involved, according to Pang Xinghuo, deputy director of the Beijing Center for Disease Prevention and Control.

Beijing has seen the daily tally of locally transmitted infections hover at around 50 in recent days, based on data released by the center. A new cluster of infections at a workplace was discovered in Fangshan district on Tuesday after over 20 people who work in a data center in Shunyi district were reported as infected on Monday.

"Beijing will stick to the principle of coping with the new epidemic situation within 24 hours to win the fight against the virus swiftly," said Xu Hejian, a spokesman for the city government.

With the city conducting rounds of mass nucleic acid testing in many districts, he said authorities should improve the testing service and ensure smooth operation to avoid gatherings that could cause infection risks.

As of Tuesday afternoon, Beijing had 21 high-risk areas for COVID-19 and 34 medium-risk areas.

In addition, Beijing has reported two new clusters from workplaces discovered successively on Monday and Tuesday.

On Monday, Beijing reported a COVID-19 cluster discovered in a data center of the Beijing Rural Commercial Bank in Shunyi district.

By Tuesday afternoon, the number of infections of the cluster had risen to 28, of which 24 were employees and the rest their family members, said Pang.

"This cluster has a large scale and the confirmed cases visited a wide range of locations in the city, involving seven districts including Shunyi, Haidian, Fengtai, Chaoyang, Tongzhou, Changping and Xicheng," she said.

"It's expected that the infections from the cluster will continue to increase in the near future, but the situation is under control since strong prevention measures have been taken."

According to Zhang Yanlin, deputy head of Shunyi, the district has identified 1,897 close contacts and 1,646 sub-close contacts of the new cases related to the cluster.

"All of the contacts who are in Shunyi have been transferred for centralized quarantine and the information of the ones who are not in Shunyi has been delivered to the authorities of other districts," he said.

All 103 locations with infection risks have been disinfected, Zhang added.

Up to 13 residential communities have been designated as controlled zones and 37 communities as precautionary zones.

On Tuesday, Beijing reported another cluster in Fangshan district involving a subway renovation project. By Tuesday afternoon, 14 employees of the project had been confirmed as COVID-19 cases.

Zhang Mingzhi, a spokesman for Fangshan district, said all 48 staff working on the project have been quarantined and other prevention and control measures including testing have been carried out.