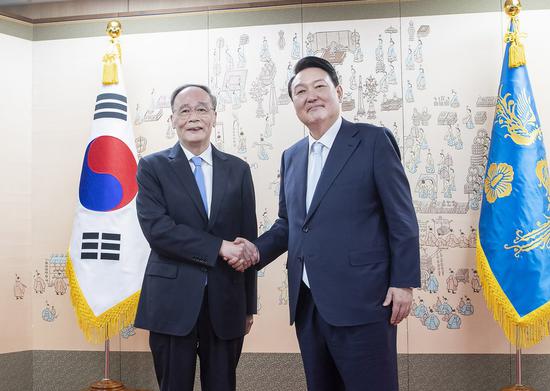 As Chinese President Xi Jinping's special representative, Wang attended the inauguration ceremony of Yoon earlier in the day. During the meeting with Yoon, Wang conveyed Xi's cordial greetings and best wishes to him.

China and South Korea, as close neighbors and important partners, have witnessed all-round and rapid development in bilateral relations with increasing common interests since the establishment of diplomatic ties, Wang said, adding that in the face of a changing world and a pandemic unseen in a century, it's of greater importance for both sides, the region and the whole world to strengthen China-South Korea cooperation.

China is willing to work with South Korea to continuously lift the China-South Korea strategic cooperative partnership to a higher level and in keeping with the times, he stressed.

Wang proposed a five-point proposal on the next development of bilateral relations.

Firstly, China and South Korea should enhance strategic communication and high-level exchanges, as well as further invigorate dialogue and exchanges at all levels.

Secondly, the two sides should deepen pragmatic cooperation, strengthen the alignment of development strategies of the two countries, and deepen cooperation in key areas and third-party markets to upgrade bilateral cooperation.

Thirdly, as China and South Korea are geographically linked, their peoples are connected by kinship and cultures enjoy a natural affinity, the two countries should give full play to this advantage and take the 30th anniversary of diplomatic ties and the China-South Korea Year of Cultural Exchanges as an opportunity to plan and implement more activities conducive to enhancing people-to-people friendship, so as to continuously inject positive energy into the growth of bilateral ties.

Fourthly, the two countries should strengthen communication and coordination in international and regional affairs, be committed to upholding multilateralism and the free trade system, and promote regional and global development and prosperity.

For his part, Yoon asked Wang to send his best regards to President Xi.

Since the establishment of diplomatic ties, the two countries have witnessed rapid progress in the development of bilateral relations, and the two-way trade has reached an all-time high despite the COVID-19 pandemic, Yoon said.

He noted that the South Korean government, on the basis of mutual respect, is ready to take the 30th anniversary of diplomatic ties as an opportunity to promote closer high-level strategic communication and exchanges at all levels, further strengthen exchanges and cooperation in all areas and enhance the people-to-people friendship, so as to usher in a new era for bilateral relations.

South Korea is willing to strengthen communication and coordination with China to jointly promote peace, stability and prosperity on the Korean Peninsula, he added.