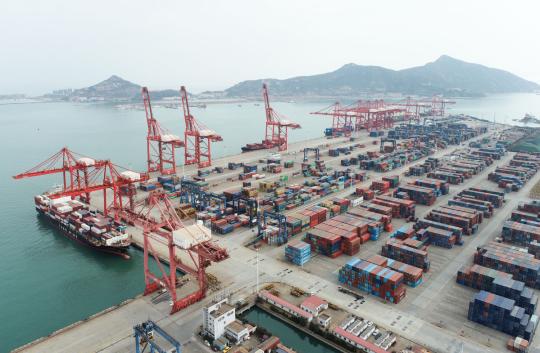 Despite rosy trade figures in the first quarter, China has to work hard this year to ensure foreign trade growth and improve its trade structure, due mainly to increased uncertainties both at home and abroad, industry experts said.

Although first quarter export growth beat expectations, the impact of the COVID-19 pandemic may continue to squeeze exporters and could pressure overall foreign trade performance in the first half of 2022, they said.

Their comments came after the General Administration of Customs said on Wednesday that China's exports of goods in March surged by 12.9 percent year-on-year to more than 1.75 trillion yuan ($274 billion).

The combined exports and imports hit around 3.2 trillion yuan during the month, increasing 5.8 percent year-on-year, although imports dipped by 1.7 percent to about 1.45 trillion yuan.

The foreign trade in goods reached 9.42 trillion yuan in the January-March period, up 10.7 percent year-on-year. Exports grew by 13.4 percent on a yearly basis to 5.23 trillion yuan while imports increased by 7.5 percent to 4.19 trillion yuan.

Given more efforts to boost foreign trade, analysts predict the nation's foreign trade will continue to expand in 2022, probably at a rate higher than gross domestic product growth, thanks to the strong resilience of Chinese enterprises and effects of policy measures to ease the burden on companies and stabilize overall economic growth.

"The much-better than expected trade figures have mirrored the steady performance of China's traditionally competitive export items, as well as the ongoing expansion of fast-growing new trade models and items," said Liang Ming, director of the Chinese Academy of International Trade and Economic Cooperation's Institute of International Trade.

Yet more must be done to further improve logistics, smooth operations of industrial and supply chains, vitalize enterprises and drive up overall economic growth, to boost foreign trade, he added.

Li Kuiwen, a spokesman for the General Administration of Customs and head of its statistics and analysis department, said at a news briefing in Beijing on Wednesday that China needs to make greater efforts to stabilize the growth in foreign trade amid increased internal and external challenges.

The administration said exports of major items such as mechanical and electrical products, solar cells, lithium batteries and motor vehicles all maintained an upward trend during the first quarter.

Liang said the unfaltering competitiveness of Chinese products will promise a continuous increase in export orders to offset previous declines in those orders, especially once China controls the epidemic in Shanghai, a gateway for about one-fifth of its exports.

However, it is important to coordinate epidemic control measures among different regions to increase logistics efficiency and smooth operations of industrial and supply chains, while further tapping the potential of overseas markets, he said.

External uncertainties such as interest rate hikes in the United States will also pose some challenges for Chinese enterprises in their bid to grow. The authorities must adopt more policies to improve the cash flows of enterprises and vitalize their operations, Liang added.

Gao Lingyun, a senior research fellow and director of the international investment division of the Chinese Academy of Social Sciences' Institute of World Economics and Politics, suggested the government take more measures such as green-track channels to enhance logistics and facilitate enterprise operations.

More foreign trade facilitation measures and better use of the rules of the Regional Comprehensive Economic Partnership, which took effect on Jan 1, are also advisable, he said.

Chen Geng, chairman of Fashion Flying, an outdoor-garment company in Fuzhou, Fujian province, said the epidemic and geopolitical uncertainties have disrupted its normal production and shipments to foreign clients, although the company has managed to cope well.