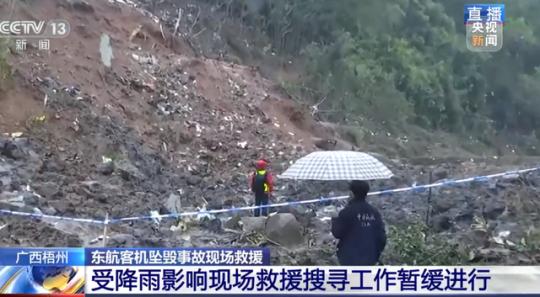 Heavy rain on Wednesday has forced the suspension of the large-scale search and rescue operations in a remote mountainous area in southern China's Guangxi Zhuang autonomous region for the survivors and black boxes of a China Eastern Airlines plane that crashed on Monday.

Flight MU5735 left Kunming, capital of Yunnan province, at 1:11 pm on Monday with 132 people on board, and was scheduled to arrive in Guangzhou, Guangdong province, at 3:05 pm. Air traffic controllers lost track of the plane over Wuzhou, Guangxi, at 2:21 pm.

Heavy rain started to hit the crash site near Tengxian county's Molang village early on Wednesday morning. According to preliminary analysis, the site covers an area of 20,000 square meters, which is about the size of three soccer fields.

As the site is surrounded by mountains on three sides, rescue workers have had difficulty carrying out their work. No survivors have been found as of 3 pm on Wednesday.

At 9:21 am, the meteorological department of Tengxian issued a warning for rainstorms, which are expected to last through at least Wednesday afternoon.

The soil at the crash site has absorbed a lot of water, which has raised the risk of landslides, so large-scale search and rescue operations have been suspended. In addition, the teams have to drain the water first before resuming their efforts, search and rescue authorities said on Wednesday.