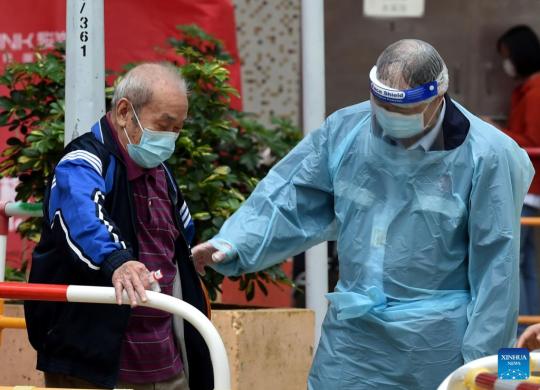 Hong Kong announced a raft of changes on Monday due to developments in its COVID-19 pandemic situation, including shelving compulsory mass testing, lifting flight bans on nine countries and setting a date for the resumption of face-to-face classes.

Although it is believed that the fifth wave of the outbreak has passed its peak, the pandemic situation is still grave and most social distancing measures will remain in place until April 20, Hong Kong Chief Executive Carrie Lam Cheng Yuet-ngor told the daily anti-pandemic news conference.

Hong Kong's daily COVID-19 caseload peaked on March 3, when the city reported 56,827 new infections. The figure has fallen to less than 20,000 in recent days.

Explaining the reasons for shelving the citywide testing plan, Lam said experts had suggested the mass testing should be conducted in the early or late stages of the outbreak, not when the pandemic is still at a high level, as it is now.

She stressed the suspension does not mean Hong Kong would coexist with the virus. "When the time is suitable and conditions are appropriate, we will consider whether to use compulsory universal testing," Lam said.

Lam also said that from April 1, double vaccinated Hong Kong residents will be able to board flights from nine countries, including the United Kingdom, the United States, Australia and Canada. The quarantine period for those overseas arrivals will be shortened to seven days if they test negative on the sixth and seventh days after arrival.

Primary schools, international schools and kindergartens across the city will be able to resume face-to-face classes on April 19 at the earliest. Secondary schools will follow suit after the Diploma of Secondary Education Examination, which is scheduled to begin on April 22, Lam added.

At the same briefing, Lam said the explosive growth in local transmissions had slowed recently and many experts regarded the peak as likely over.

Despite the decline, Lam cautioned that the situation remains severe, as the daily number of cases is still high.

To prevent a rebound, Lam said most social distancing measures will remain in place until April 20. If the pandemic continues to abate, the government will ease the restrictions in three phases from April 21, starting by allowing eat-in services at restaurants at night and reopening fitness centers.

Most restrictions will be lifted in the final phase except for some basic anti-pandemic requirements such as wearing masks in public venues, using the LeaveHomeSafe contact tracing app and following the Vaccine Pass policy.

Lam said that after a short-term review, the government will also formulate a long-term plan that balances anti-pandemic needs and economic development demands.

Luk Tsz-ying, a nurse working at an elderly care home in Hong Kong, expressed support for the suspension of mass testing and the maintenance of current social-distancing measures. She said the number of daily infections is still high and allowing large-scale gatherings at this time may spread infections in communities.