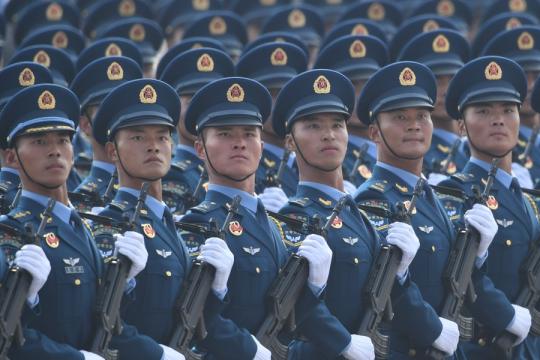 A formation of People's Liberation Army (PLA) Air Force takes part in a military parade celebrating the 70th founding anniversary of the People's Republic of China in Beijing, Oct 1, 2019. （Photo/Xinhua）

The moderate increase in the annual defense budget is needed by China to handle complex security challenges and fulfill its responsibility as a major country, according to a military spokesman.

Senior Colonel Wu Qian, spokesman for the delegation of the People's Liberation Army and the People's Armed Police Force at the fifth session of the 13th National People's Congress, China's top legislature, said on Wednesday that it is equally important for China to maintain economic growth and strengthen its military capability.

China takes into consideration both national defense demands and the economic situation while planning its defense budget, said Wu, who is also a spokesman for the Ministry of National Defense.

"History has proved and continues to prove that our military is always a staunch force in safeguarding national interests and protecting world peace. It is in the world's interest that China maintains reasonable and steady growth in its defense spending," he said.

The Chinese government includes defense spending in its annual overall budget, which is submitted to the top legislature's annual session for review and approval. It has also submitted a report on military spending to the United Nations every year since 2008, Wu said.

"The so-called hidden military spending hyped up by some foreign parties has turned out to be nothing but groundless lies," he said.

China plans to raise its annual defense budget by 7.1 percent to 1.45 trillion yuan ($230 billion) for fiscal year 2022, its seventh straight year of single-digit growth, according to a draft budget plan unveiled on Saturday, the first day of the top legislature's annual meeting.

He added that compared with other military powers, like the United States, China's defense budget takes up a smaller proportion of GDP and overall government spending as well as per capita expenditures.

According to reports from multiple news agencies, the Biden administration is expected to ask the U.S. Congress for more than $770 billion for its defense budget for the next fiscal year.

Speaking about the Taiwan question, Wu said the attempts by the U.S. and Japan to play the "Taiwan card" as a tool to contain China are a pipe dream.

"The more farces the U.S. and Japan make on the Taiwan question, the tougher the actions we will take to safeguard our sovereignty and territorial integrity," he said. "I must make it clear that the PLA will never tolerate any 'Taiwan independence' secessionist acts and foreign forces' interference and will crack down on them without mercy."