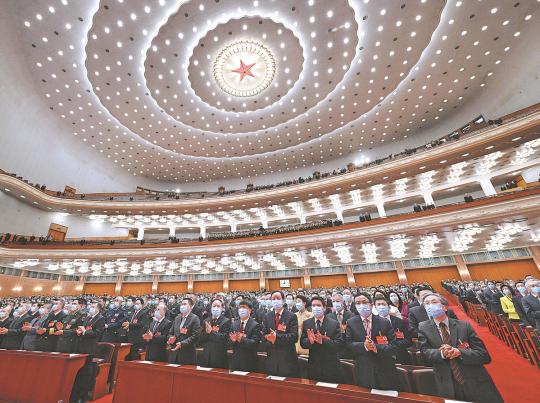 National political advisers attend on Thursday the closing meeting of the fifth session of the 13th National Committee of the Chinese People's Political Consultative Conference, China's top political advisory body, at the Great Hall of the People in Beijing. (RAO AIMIN/XINHUA)

National political advisers were urged to maintain firm faith in China's system and shoulder the political responsibility to pool wisdom and promote unity among the Chinese people, as the annual session of the top political advisory body closed on Thursday.

In a speech to about 2,000 national political advisers at the closing meeting of the fifth session of the 13th National Committee of the Chinese People's Political Consultative Conference, Wang Yang, chairman of the committee, also urged them to constantly improve their political judgment and observe issues from a political perspective.

President Xi Jinping, who is also general secretary of the Communist Party of China Central Committee and chairman of the Central Military Commission, attended the meeting with other leaders in Beijing.

Wang said that CPPCC members, from all walks of life, may hold different views on some issues, but their political stance should be clear and firm, and their political direction cannot deviate.

It is necessary for them to continuously enhance their political judgment, the ability to observe problems with a political perspective, the ability to seek the essence of phenomena in complicated situations, and distinguish between truth and falsehoods in the exchange of diverse thoughts, he said.

"In the face of unprecedented risks and challenges, we shall strengthen our confidence in our system," he said, calling on members to maintain a high degree of consistency with the CPC Central Committee, with Xi at the core.

Wang also required the CPPCC to better perform its duties for the people, calling on advisers to listen to people's voices more carefully and address their concerns.

The advisers should offer suggestions to meet people's aspirations for a better life and help the Party and the government improve people's well-being, Wang said.

He also called for efforts to promote policies and respond to people's doubts, focusing on aspects where people feel confused, interests are interwoven, and contradictions can easily occur.

Wang said that the CPPCC, as a specialized consultative body, should improve the quality of consultation, give practical suggestions and avoid formalism.

Given the complex situation, difficult tasks and diverse ideas, it's necessary to raise the level of consultation to pool wisdom, seek solutions and build consensus, he said.

About 6,000 proposals and suggestions were made during this year's CPPCC session, mainly on economic, political, cultural, social and ecological issues, according to official data.