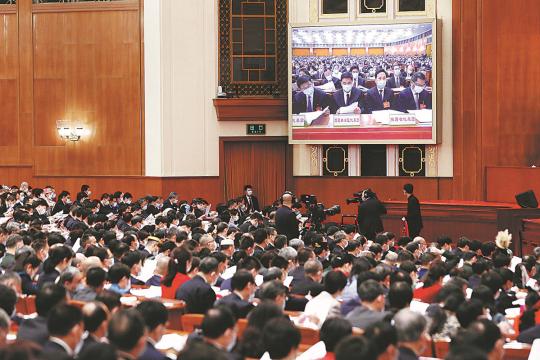 Deputies to the 13th National People's Congress attend the second plenary meeting of the fifth session of the 13th NPC at the Great Hall of the People in Beijing on Tuesday. (WANG ZHUANGFEI/CHINA DAILY)

The number of people prosecuted in cases related to disturbing social order declined last year, while the number of public interest litigation cases increased, especially in the field of environmental protection, according to the annual work report of the Supreme People's Procuratorate.

Procuratorates nationwide dealt with 3,637,000 cases, up 20.9 percent year-on-year. Among them, 635,000 were criminal, civil and administrative cases, up 24.4 percent year-on-year, according to the report, which was submitted for review on Tuesday to the ongoing fifth session of the 13th National People's Congress, the country's top legislature.

Hu Guangyang, deputy head of the procuratorate's general office, said the decline does not mean that the intensity of the crackdown on such crimes has weakened, but shows that positive results have been achieved in social governance.

"The special campaign targeting organized crime from 2018 to 2021, for instance, has effectively solved prominent problems affecting the people's sense of security. Also, the public's awareness of the law has been enhanced and the public order has continued to improve," Hu said.

Hu said that establishing the system of initiating public interest litigation by procuratorial organs is an important institutional arrangement to promote the modernization of China's governance system and capacity with the thinking and approach of rule of law.

"Procuratorates can issue procuratorial suggestions to responsible authorities or file lawsuits against the authorities or other lawbreakers in cases where illegal activities were found to have harmed national and social interests. Through public interest litigation, many ecological and environmental problems have been effectively resolved," he said.

Such environmental protection cases led to the recovery of about 28,700 hectares of damaged farmland, woodland and grassland last year, in addition to the restoration of 32,000 hectares of polluted land in the past year.

The report mentioned the environmental protection public interest litigation case of Nansi Lake, which was handled last year by the SPP. The lake basin, which was heavily polluted, is shared by Shandong, Jiangsu, Henan and Anhui provinces.

After the SPP took up the case in April 2021, it called on prosecutors from the four provinces to handle it. With these joint efforts, the lake's waters were restored after 10 months.

In addition, around 49,000 people were prosecuted for damaging the environment through illegal dumping of hazardous waste and smuggling trash for processing from other countries, down 4.8 percent year-on-year, the report said.

"In recent years, China has attached great importance to environmental protection, and law enforcement and judicial organs have kept cracking down on such crimes, which has led to a 'turning point' in this regard," Hu said.