IPC president: 2022 Paralympics will be benchmark for future Games 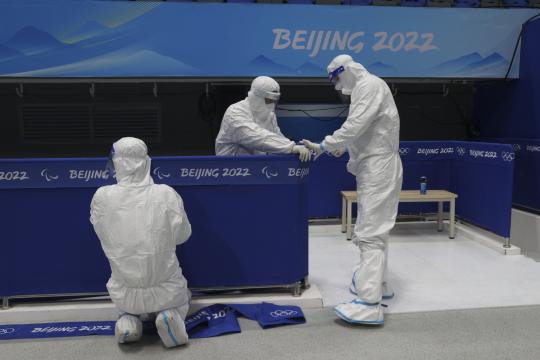 Staff workers replace banners at the National Stadium as the venue prepares for the Beijing 2022 Paralympic Winter Games, which will open on March 4. （HEI JIANJUN/FOR CHINA DAILY）

International Paralympic Committee President Andrew Parsons is confident that the 2022 Beijing Winter Paralympics will set the standard for future Games and spread the message of the Paralympic Movement.

"It will be a benchmark for future Paralympic Winter Games. … I could not be more excited, and I'm counting the hours to get on the plane to fly to Beijing," Parsons said in an online interview with Chinese media on Tuesday.

A total of 736 athletes will compete, with 39 medal events for men, 35 for women and four mixed events.

Beijing 2022 will be the biggest ever Paralympic Winter Games, according to the International Paralympic Committee website. "I think it shows the strength of the Paralympic movement, that we are getting stronger and stronger and more relevant," Parsons said, adding the movement also has a higher purpose. "As we get stronger, our message reaches more and more people," he said.

Parsons said he had calculated that 7 percent of the world's disabled people live in China. "That's why having China so committed in maximizing the opportunity of the Paralympic Winter Games is so important to us," Parsons said.

If the world wasn't dealing with the COVID-19 pandemic, more nations would likely be participating, he added.

As the host nation, China will send a record number of 96 athletes to compete at the Paralympics.

The Chinese delegation, which was officially formed on Monday, has 217 members, including 121 coaching staff, support crew and medical personnel.

Parsons visited Beijing during the 2008 Summer Paralympics, and the experience made him very confident that China will present to the world a fantastic Winter Paralympics.

"The great memories have changed the way the Summer Games were delivered, and this is precisely what we are expecting at the 2022 (Paralympics)," said Parsons, who has traveled regularly to China for the past three years. "The venues are incredible," he said, adding that some were "iconic" venues from the 2008 Games.

"For some of us who had been there in 2008, it's amazing for us to see the Water Cube turned into the Ice Cube, for example," he said, saying another chapter has been written in the history of China from 2008 to 2022. "China has become this superpower and very important country in the world in many areas－such as the economy, politics－but sports as well," Parsons said.

With the pandemic still a major concern, it will not be an easy job to stage a safe Paralympics. But with the hard work of the Paralympic organizers and the experience gained from the recently completed Beijing Winter Olympics, Parsons said he is confident that the para athletes will enjoy the "safest" environment in Beijing.

"We are more confident after the (Winter) Olympics when it comes to the pandemic and all the countermeasures in the closed loop. It worked and some days we had zero positive cases, which is incredible under such circumstances. You don't see that in any part of the world," he said.

Athletes have been training under challenging circumstances over the past two years due to the pandemic, and it is important they are given the recognition they deserve, Parsons said.